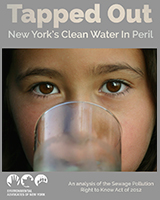 Tapped Out: New York’s Clean Water in Peril, documents sewage overflows and the rampant underreporting of such spills in New York State. The report also documents how underinvestment has lead to a crumbling infrastructure and increased sewage discharges in New York waterways.

A review of data published through the Department of Environmental Conservation (DEC), in accordance with the Sewage Pollution Right to Know Act of 2012, shows that between May 2013 and June 2015, 2,696 sewage overflows were reported – likely a very conservative figure due to underreporting of incidents.