A coalition of regional and national conservation organizations and supporters today presented more than 22,000 petition signatures and thousands of personal letters to Gov. Andrew Cuomo’s Adirondack Park Agency calling on the agency to protect the pristine and sensitive Boreas Ponds tract as motor-free wilderness.

Albany – A coalition of regional and national conservation organizations and supporters today presented more than 22,000 petition signatures and thousands of personal letters to Gov. Andrew Cuomo’s Adirondack Park Agency calling on the agency to protect the pristine and sensitive Boreas Ponds tract as motor-free wilderness.

Public hearings on the state’s land-classification plans for the stunningly beautiful mountain-scape have already begun. They will continue through early December. Public comments will be accepted by the Adirondack Park Agency (APA) through Dec. 30.

The BeWildNY Coalition is calling for a wilderness (no motors) classification on about two-thirds of the Boreas Ponds tract, with a buffer of wilderness at least one mile wide separating the access road and parking lot from the ponds.

The groups also released a new video showing why the Boreas Ponds tract should be protected from cars, trucks, snowmobiles and other vehicles. The three-minute educational video is narrated by actress Sigourney Weaver. The music soundtrack was composed by Michael Bacon.

Both artists own homes in the Adirondack Park and have been coming to the park since they were children. Both donated their time to the cause of wilderness. 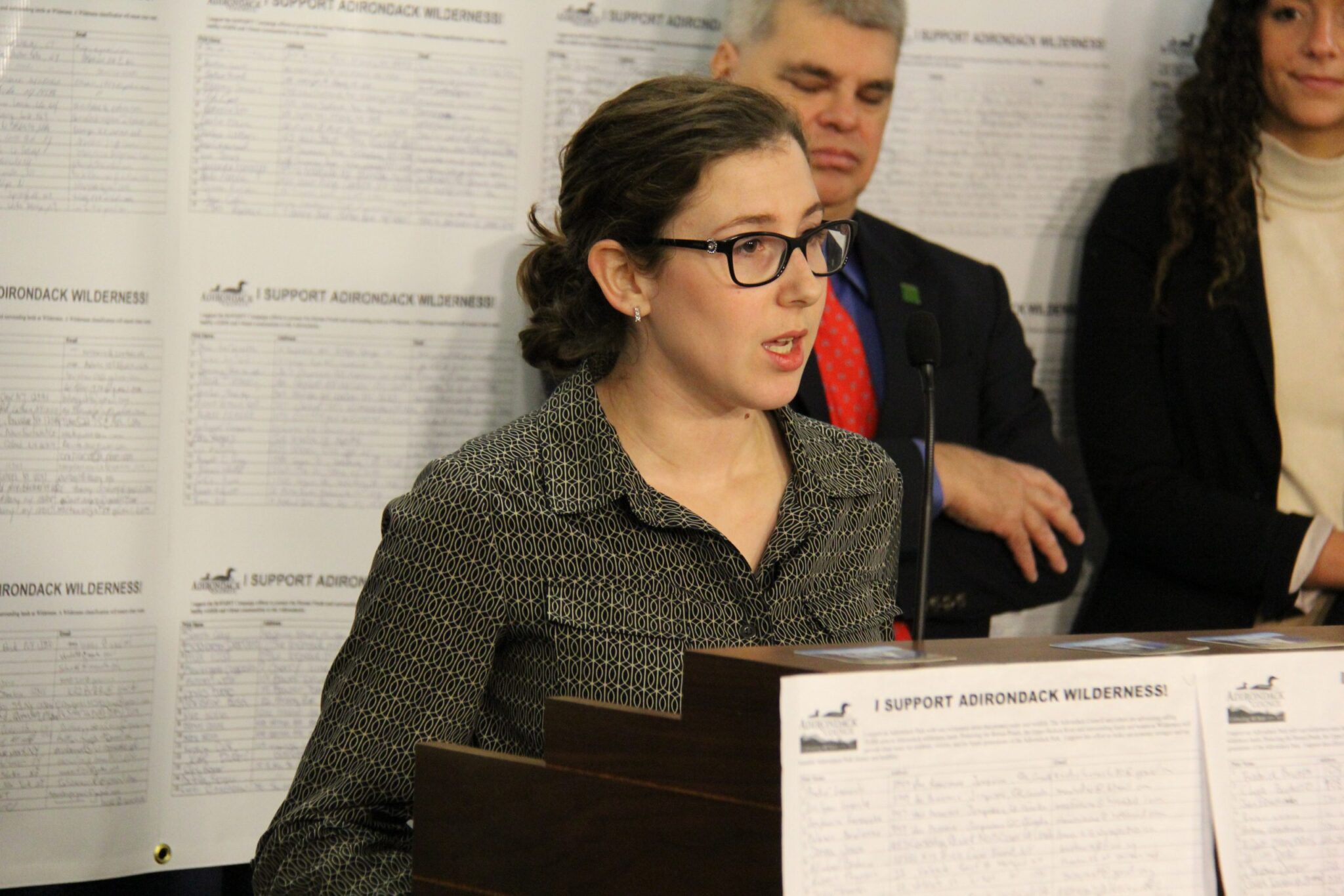 “The Adirondack Park is a national treasure, created in 1892 to protect pure water, unspoiled forests and sensitive wildlife,” Ms. Weaver states in the video. “It is the largest park in the contiguous United States, greater in size than Yellowstone, Yosemite, Glacier, and Grand Canyon National Parks combined. But only a small portion of the Adirondack Park is protected as wilderness, where the forest is a sanctuary from noise, pollution and automobiles.

“We now have a once-in-a-lifetime opportunity to expand the park’s largest wilderness area, which safeguards New York’s tallest mountains and drinking water: the headwaters of the mighty Hudson River,” she said. “Together, we can connect these long-missing pieces of wild lands and create a single wilderness inside the Adirondack Park as large as many national parks out West. It will be our legacy to future New Yorkers and the world. It will remind the world that New York is where wilderness preservation is alive and thriving.”

The video is being made available online and will be distributed to television and radio stations for use as a Public Service Announcement and in news broadcasts.

In presenting the petition signatures, letters and emails collected to date, BeWildNY Coalition members praised the public response to the call for wilderness at Boreas Ponds:

“Our canvassers were out over the summer talking to people who were visiting the Adirondack Park and we were thrilled by their overwhelming support,” said Adirondack Council Executive Director William C. Janeway. “These signatures represent the opinions of many, many New York residents who own this land and want it protected from vehicles.”

No Restrictions on People, Just Vehicles

“This is not a debate over where people are allowed to go,” said Neil Woodworth, Executive Director of the Adirondack Mountain Club. “People can go anywhere on any public lands in the Adirondack Park. This is a debate about where cars can go, as well as trucks, snowmobiles and other vehicles. Some places are just too sensitive for vehicle access.”

Not Pristine? Give it Time

“Advocates for motorized access say the Boreas Ponds tract can’t become wilderness because there are a few dirt roads on it and a small dam,” said Adrienne Esposito, Executive Director of Citizens Campaign for the Environment. “All of the Adirondack Forest Preserve — except for a few hundred thousand acres — was once heavily logged, developed or scorched to the ground by wild fires. If we allow nature to be the dominant force on this landscape instead of cars and trucks, it will be pristine again in no time.”

The BeWildNY Coalition has taken special care in its proposal for classification to leave the southern portion of the Boreas Ponds tract classified as non-wilderness so that a snowmobile trail could be built to connect Newcomb and North Hudson (see www.BeWildNY.org). They called the plan balanced and fair, without compromising the ecological health of Boreas Ponds.

“A wilderness classification for Boreas Ponds will be beneficial for wildlife, including some of the state’s most beloved and iconic bird species — Common Loon and Black-throated Blue Warbler – that rely on its pristine habitat for survival,” said Erin Crotty, Executive Director of Audubon New York. “Adding this parcel to the Adirondack Forest Preserve is a significant investment in advancing the quality of life for the birds, wildlife and people of New York.”

Good for the Economy

“In addition to the environmental benefits, wilderness can bring significant economic rewards to Adirondack towns and villages,” said Marcia Bystryn, Executive Director of the League of Conservation Voters. “A recent study by the Clarkson University School of Business found that wilderness lands bring a significant premium to their host communities. Over the past decade, people paid much more for real estate inside the Adirondack Park than for similar real estate outside of the park. Inside the park, buyers paid 25 percent more to be near wilderness areas than other places, where snowmobiles and jeeps are welcome.”

“The state’s current plans for the Boreas Ponds tract will not protect this delicate ecosystem from the destructive consequences of motorized vehicles, which include traffic, soil degradation, and the spreading of invasive species,” said Liz Moran, Water & Natural Resources Associate of Environmental Advocates NY. “Thousands of New Yorkers are now calling on Governor Cuomo to ensure this wilderness stays wild by banning motorized vehicles – and he should listen to them.”