Albany – Today on World Water Day, environmental organizations and residents of Hoosick Falls and Newburgh were joined by Congressman Paul Tonko (D-NY), Chair of the Energy & Commerce Subcommittee on Environment & Climate Change, to continue their call to save the Environmental Protection Agency (EPA) from the Trump administration’s reckless budget proposal.

The proposal would gut the agency by a whopping 31-percent. Funding would plummet from $8.9 billion to just $6.1 billion, slashing and eliminating several clean water, environmental, and science-based initiatives. Not surprisingly, EPA Administrator and former coal lobbyist Andrew Wheeler has called the plan a “commonsense budget proposal.”

In addition to the 31-percent cut to the EPA, the proposed budget would impact several programs nationally and right here in New York, including: 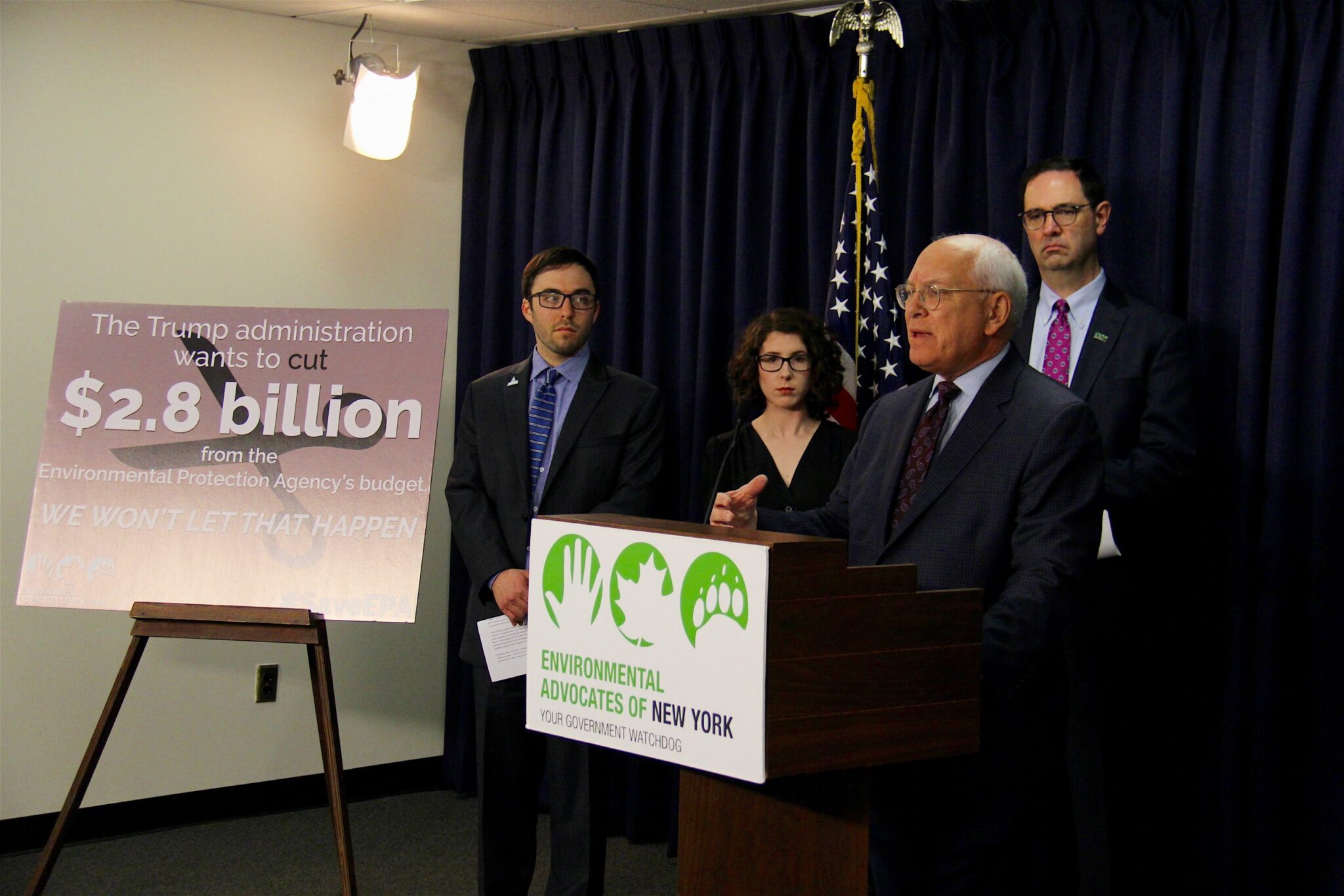 Congressman Paul Tonko said, “President Trump’s reckless proposal to slash funding at EPA directly undercuts the agency’s mission, which is to keep our families, communities and environment safe from contaminants, pollution and other serious threats to public health and safety. We should be dedicating the resources needed to rise to the challenges we face with dangerous contaminants such as PFAS and lead in our water supplies, an urgent and growing climate crisis, and workers facing deadly chemical exposures. Instead, the President is pushing for a reduced agency workforce that is unable to generate, publish or use independent science free from political and special interests. Thankfully this unserious proposal has no chance of passing in the House, thanks to the commitment of many of our local and national environmental leaders and the impassioned votes and voices of the American people.”

Michelle O’Leary, member of New York Water Project and Hoosick Falls resident said, “In Hoosick Falls, buying bottled water became the new normal when we learned our drinking water was contaminated with PFOA. We learned to budget for clean water. President Trump clearly needs to take a kitchen table economics class from us, because only someone who has never feared for the safety of his tap water could make such drastic cuts to EPA. These proposed budget cuts mean free rein for polluters and dirtier drinking water. As Hoosick Falls continues to wait for enforceable limits to be established on PFOA in drinking water, we need an EPA that will be more aggressive in protecting public health, not less.”

Ophra Wolf, member of the Newburgh Clean Water Project said, “Newburgh residents continue to bear the brunt of a lack of oversight and responsibility at the federal level for protecting our water. In addition to Newburgh’s PFAS pollution, we have lead in our drinking water, high levels of contaminants due to overdevelopment of our watershed by surrounding towns, and massive sewage discharges into the Quassaick Creek and Hudson River. At a time when our clean water is imperiled, EPA budget cuts leave communities like Newburgh hung out to dry.”

Peter M. Iwanowicz, executive director of Environmental Advocates NY said, “Unfortunately, we now have an environmental agency that sits squarely in the pockets of industry polluters. Though the Trump administration’s relentless attacks on the EPA budget over the last two years have been blocked, we don’t want the latest proposal to go unnoticed. If his cuts take effect, the damage to our natural resources and people will be felt for generations to come. The most recent budget proposal is an all-out assault on New York’s most prized asset – its clean water. We are grateful that leaders like Representative Tonko are standing up to these dangerous cuts, and extend our sincerest gratitude to him and his colleagues for renouncing this flawed and obtuse proposal.”

William C. Janeway, executive director of the Adirondack Council, said, “Deep cuts to EPA’s budget would place the Adirondack Park in grave danger. A 31-percent cut would cripple the EPA’s ability to protect the Adirondacks from acid rain and smog coming from outside of New York State. Since the vast majority of our acid rain comes from Midwest smokestacks, the Adirondacks would be left vulnerable. Because the park has been chronically damaged for so long by acid rain, the soils in many watersheds have lost their buffering capacity. New acidity will mean immediate damage. In addition to enforcement, EPA provides most of the money for scientific research into the extent of the damage and the measures that will be needed to reverse it. This effort is vital to the forests, fish, wildlife and communities of the Adirondacks. Our economy depends on a clean and healthy environment.”

Neil Woodworth, executive director of the Adirondack Mountain Club said, “From the highest peaks to the lushest wetlands and valleys, New York’s Adirondack Mountains are a priceless resource that must forever be protected. Unfortunately, we now have to defend this pristine wilderness from the very people who are charged with keeping it clean. Now run by a former coal lobbyist, today’s Environmental Protection Agency is a shell of its former glory. We applaud Congressman Paul Tonko and his colleagues for understanding the priceless value of clean air and water and standing up to an agency leadership that now sides with Big Coal and the operators of coal burning power plants. Let’s save the EPA from those intent on destroying its legal powers to protect New Yorkers from unhealthy air and the Adirondacks from acid rain, mercury and particulates.”

Elizabeth Moran, Environmental Policy Director for NYPIRG said, “President Trump’s proposed cuts to EPA put access to clean drinking water in peril. With needs clocking in at a whopping $80 billion dollars, New York has some of the highest water infrastructure needs in the country. Among the numerous proposed cuts, slashing federal water infrastructure programs will directly harm New York communities. New York’s congressional delegation must fight for a fully-funded EPA that can protect water and health for all New Yorkers.”

Jeremy Cherson, Legislative Advocacy Manager for Riverkeeper said, “This administration believes the third time is the charm with their proposal for deep cuts to the EPA. It is completely reckless. We thank Representative Tonko and urge his colleagues to follow his leadership in safeguarding the EPA’s budget once again.”