ALBANY, NY – A coalition of environmental groups presented over 100,000 petitions from individuals across the United States, including tens of thousands from New Yorkers, to Governor Andrew Cuomo urging him to support a full ban on fracking and related activities in the Delaware River Basin, including wastewater treatment, storage, and disposal, as well as water withdrawals for fracking.

The groups held a press conference in the capitol before delivering the petitions to the Governor’s office. 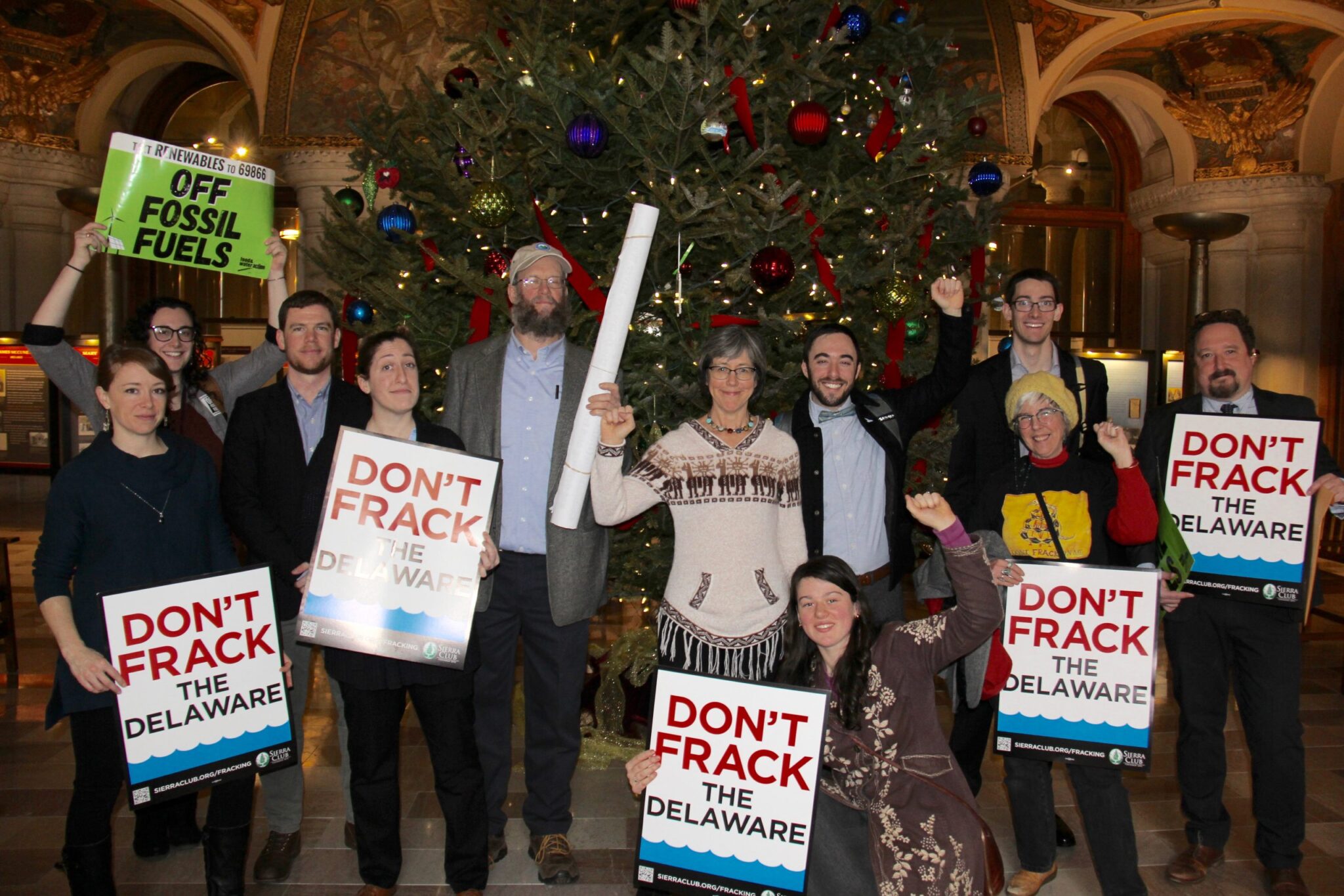 After years of grassroots pressure, the Delaware River Basin Commission (DRBC) will soon vote on proposed regulations to permanently ban fracking in the Basin. But the proposed ban should go much further by prohibiting the treatment and processing of toxic fracking waste, as well as water withdrawals from the Basin for fracking.

Since New York holds one of the five votes on the DRBC, advocates point out that Governor Cuomo can fully protect the watershed from toxic frack waste.

Four years ago, Cuomo announced the statewide ban on fracking. Groups at the petition delivery point out that the Governor now has an opportunity to expand on that milestone, as a crucial step in shifting New York off fossil fuels to renewable energy.

Senator Liz Krueger said, “The safety of our drinking water should be should be a primary concern for all public officials. The dangers of fracking have been well established, to the point that New York State has banned the practice outright. So it makes no sense to allow fracking or fracking waste anywhere near the Delaware watershed, or to let this pristine public water resource be used to support fracking operations elsewhere. I urge the Governor to build on his record, and continue to say no to fracking.”

Senator Brad Hoylman said, “Four years ago, based on growing concerns over potential health hazards, Governor Cuomo took the bold step of banning high-volume hydraulic fracturing, or hydrofracking, throughout our state. Enacting a full ban on fracking in the Delaware River Basin would build off this achievement and preserve our natural resources for generations to come. Thank you to Food & Water Watch, Catskill Mountainkeeper, Sierra Club Atlantic Chapter, Riverkeeper, Environmental Advocates NY, Earthworks, and the Natural Resources Defense Council for working to make New York a nationwide model for environmental leadership.”

“A large portion of the 42nd Senate district lies within the Delaware watershed, including many river communities directly threatened by fracking pollution and its health and environmental impacts,” said Senator-Elect Jen Metzger. “The Delaware River is critical to the local economy of these communities, to recreational enjoyment, and to protecting the region’s rich biodiversity, and I urge the Governor to continue his leadership opposing fracking by pressing for a comprehensive ban within the Delaware River Basin that includes the storage, processing, and discharge of frack wastewater, and the use of water from the Basin for fracking elsewhere.”

“I am calling for a ban on fracking because my future is at stake. Since I was 7 years old the threat of fracking has been hanging over my family’s head! Now at 18 I am seeing how every decision that is made today will impact climate change, our lives and whether I will have clean water, fresh air and a healthy community, “ said Iris Fen Gillingham of Zero Hour.

Rob Hayes, Clean Water Associate for Environmental Advocates NY, said, “Four years ago, Governor Cuomo recognized that the future of our drinking water depends on decisions that are made today. Now, as one of five voices on the Delaware River Basin Commission, he has the power to reaffirm his position that fracking activities threaten the safety of our water supplies. We applaud the tens of thousands of New Yorkers that have expressed their support for a full ban on all fracking operations in the Basin, including wastewater treatment, storage and water withdrawals. They speak for the millions that are counting on the state’s continued leadership on clean water protections.”

“Living on the frontlines of fracking, I see the spills and waste trucks everyday,” said Melissa Troutman, a resident of Potter County, Pennsylvania. “Governor Cuomo, protect the people of New York, the Delaware River Basin, and all who live downstream from the impacts I see accumulating in my watershed. Ban the treatment, transport, storage and disposal of toxic fracking waste wherever you can.”

Wes Gillingham Associate Director of Catskill Mountainkeeper said “We know how fracking can pollute drinking water and overwhelm a river ecosystem. We know Industry is still using secret toxic chemicals for fracking. Drilling fracking and gas transport is causing methane leakage which threatens our climate. The World Health Organization just reported that the climate crisis will cost $2-4 billion per year in direct health costs. The Lancet medical journal shows that health impacts from the climate crisis will cost 4 times the cost of transitioning to meet the Paris accords. How many alarms bells need to go off?  We need to protect our communities and our planet from the fossil fuel industry and do it now. Governor Cuomo, it’s time to protect the Delaware Basin, there is no reason to allow fracking activities and the threat they pose to us all.”

“The underlying principle of New York’s fracking ban is that it is too dangerous to be done safely anywhere,”  said Roger Downs, Conservation Director for the Sierra Club Atlantic Chapter.  “To still have the Delaware River Basin, a drinking water source for 17 million people, remain potentially open to drilling represents a disproportionate risk that defies common sense and the science that supports effective public health policy.  We urge Governor Cuomo to once again to lead the charge in securing a basin wide fracking ban.”