Senator Schumer’s pledge to fight cuts to the EPA was hailed by New York City environmentalists and community leaders, who pointed out that weakening the EPA will most greatly impact communities that suffer from higher air pollution and asthma rates, and are more vulnerable to climate change impacts. And the intensifying climate crisis underscores the need for robust programs to promote energy efficiency and renewable power.

U.S. Senator Charles E. Schumer said, “Dismantling America’s climate, clean air and water and environmental programs doesn’t put America first, it puts America last—in recognizing science, in being a world leader in protecting our communities and in working together with other nations to safeguard our planet for future generations. Regardless of political affiliation, you should be outraged by proposed massive cuts to the EPA because at the end of the day we’re hurting our country’s future and leaving millions of people at greater risk to health conditions like asthma and heart disease and extreme weather conditions like the storms we have seen over the past few months. For the sake of our planet and the future of America, I will do everything in my power to protect the EPA from these disastrous cuts.”

A broad, statewide “Save the EPA” coalition has pushed Senator Schumer over the past several months to take a firm public stance against the Republican efforts to defund the agency. The coalition delivered thousands of petitions to Schumer’s New York offices, encouraging him to lead other Democratic lawmakers to resist the Republican plans to weaken public health protections. After the Trump administration called for an astonishing 31 percent cut to the EPA, Republican leaders in the House countered with a plan to cut the EPA budget by seven percent, which would shrink the agency’s budget to levels not seen since the early 1980s.

Senator Schumer’s commitment comes at a key moment for an agency that has been embroiled in nearly nonstop controversy under the leadership of Scott Pruitt, who sued the EPA 13 times as attorney general of Oklahoma. 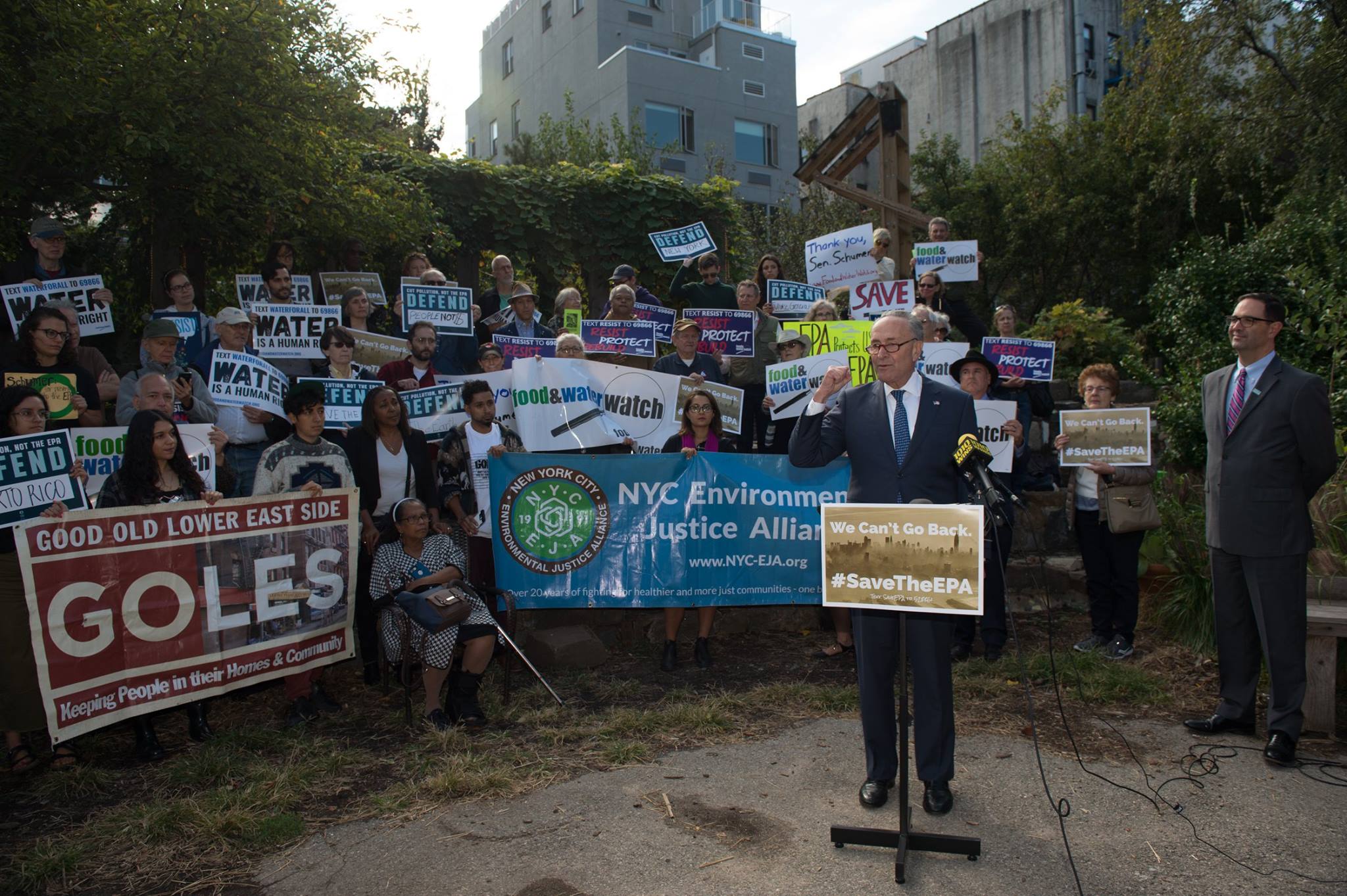 Peter Iwanowicz, executive director of Environmental Advocates NY said: “President Trump’s agenda is a clear and present danger to the health and lives of every single person in our state, especially low-income communities, and people of color. Congress cannot be complicit in his efforts to dismantle the EPA, because if they OK budget cuts, that means more people will live with air that isn’t safe to breathe, and water that isn’t safe to drink. New York has many success stories where the EPA stepped in and began the work to help communities rebound. We thank Senator Schumer for his steadfast and unwavering support for a stronger EPA, and call on the state’s House delegation to stand resolute by rejecting any and all cuts to an agency New Yorkers depend on.”

“The EPA has played an indispensable role in making New York’s air safe to breathe, water clean to drink, and our communities healthy places to live,” said Adrienne Esposito, Executive Director for Citizens Campaign for the Environment. “Proposed cuts to the EPA and budget riders that roll back environmental protections merely serve as a giveaway to corporate polluters, and will only make our state a dirtier, sicker, and less desirable place to live. We proudly stand behind Senator Schumer as he exercises his leadership in Washington and fights to save the EPA.”

“Thank you, Senator Schumer for standing up for New Yorkers and Americans everywhere by denouncing the corporate interests that are currently running the Environmental Protection Agency,” Shay O’Reilly, New York’s Downstate Organizing Representative at the Sierra Club said. “Not only is Scott Pruitt lining the pockets of corporate polluters by removing critical protections for our air and water, his behavior perpetuates the inequitable distribution of pollution in our city, which has profound consequences for the health of New Yorkers. As the anniversary of Superstorm Sandy approaches, we need an EPA that will defend people, not aid and abet corporate greed.”

“Let’s be clear: If the Republican cuts to the EPA are approved, people will suffer and people will die,” said Eric Weltman, a Food & Water Watch senior organizer based in Brooklyn. “More children will struggle with lead poisoning and asthma. More families will breathe polluted air and drink poisoned water. And more communities will be wrecked by the ravages of climate change. Americans need a strong EPA that will punish polluters, enforce drinking water standards, clean up hazardous waste sites, protect our air, and promote a safe climate.”

The EPA’s work is critical to the health of the Hudson River. Now, that critical work is under threat from a hostile Administration and Congress,” said Jeremy Cherson, Advocacy Coordinator, Riverkeeper. “Along with our partners, we will continue to fight the assault on our keystone environmental laws and hold polluters accountable. Riverkeeper thanks Senator Schumer for his opposition to all cuts to the EPA budget and encourages him to keep up the fight on behalf of New York’s clean water.”

“The role of the EPA cannot be understated,” said Kimberly Ong, staff attorney at the Natural Resources Defense Council. “We rely on the EPA to enforce all of our bedrock environmental laws, protect our drinking water, and clean up our most toxic places.  Public health and a clean environment should not be a political game, and we thank Senator Schumer for his support in fighting these irrational budget cuts and keeping the EPA operative.”