Albany –The Trump Administration’s current budget would devastate the Environmental Protection Agency (EPA), Congressman Paul Tonko (D-NY), state legislators, and environmental groups warned today. In the strongest possible terms, they condemned Trump’s proposed slashing of the EPA’s budget and emphasized that New Yorkers’ lives will be endangered if the cuts are implemented.

Congressman Paul Tonko said, “A strong EPA is our best defense against irresponsible corporate polluters that threaten the water we drink, the air we breathe and the health and safety of our families. The protections we enjoy through the EPA drive down rates of asthma, heart disease and other health conditions, keeping our workers, businesses and industries more competitive and resulting in fewer missed days of school or work. These heavy-handed cuts to EPA’s budget proposed by the Trump Administration stand in stark contrast to these common-sense protections and pose a threat to public health, our environment, and the long-term strength of our U.S. economy. With nearly 40 percent of EPA funds going directly to states, these cuts would be especially devastating to New York, which relies on those funds to support brownfield cleanups, air pollution monitoring, and water infrastructure financing. We cannot afford a Trump budget that puts special interests ahead of the needs of the people.” 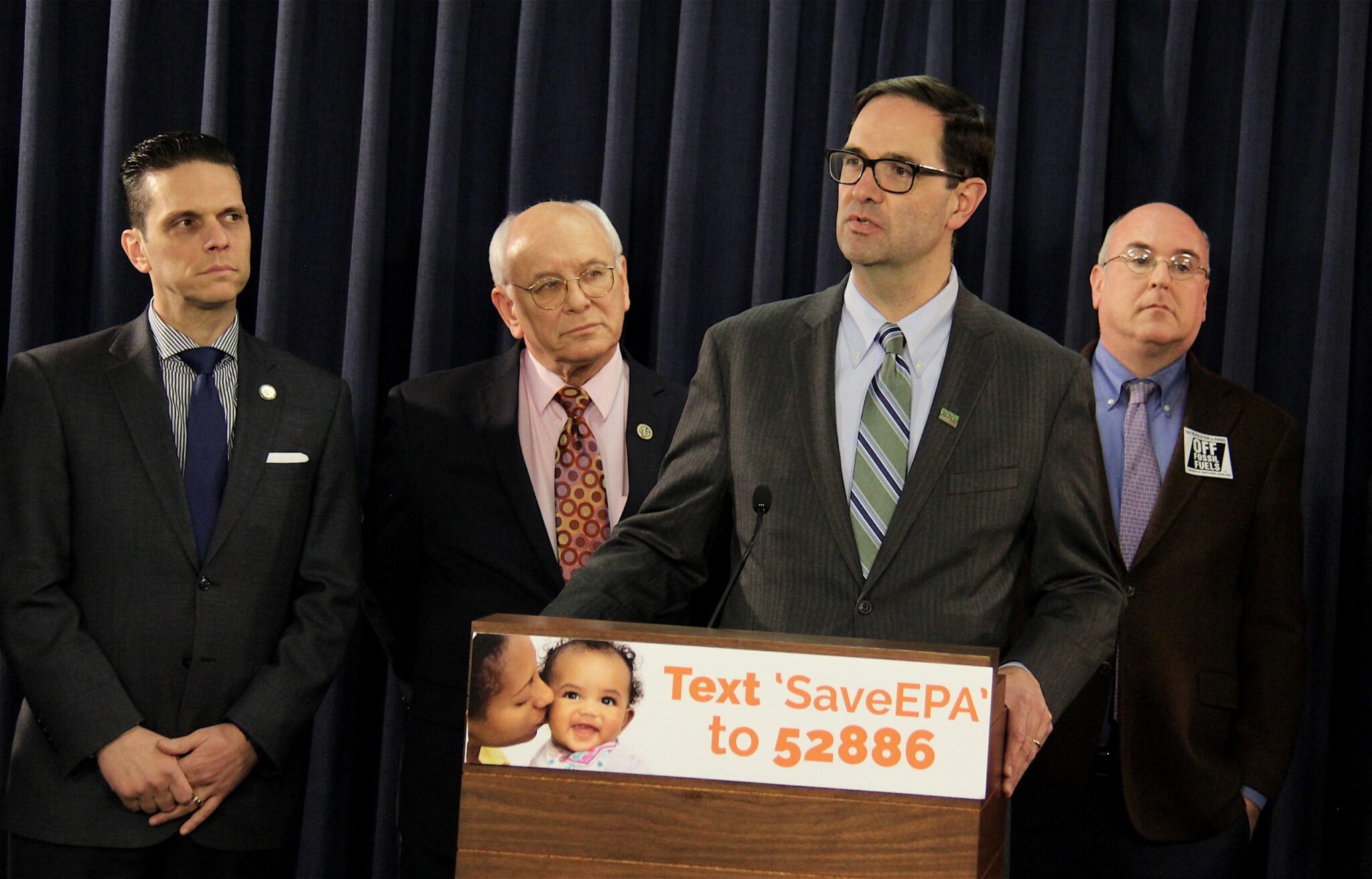 Peter Iwanowicz, executive director of Environmental Advocates NY, said, “Prioritizing polluters instead of public health has become the Trump Administration’s modus operandi. While we’ve come to expect this backward thinking, we’ll never accept it. We applaud Representative Tonko for standing up to this reckless ideology and supporting our efforts to save the EPA, an agency that is critical in keeping New Yorkers, and the environment they depend on, safe.”

Eric Weltman, a Brooklyn-based senior organizer with Food & Water Watch, said, “Donald Trump’s assault on the EPA presents real threats to American lives. Clean air, safe water, and healthy communities are at risk when Trump and Republicans slash the EPA’s budget. We’re proud to stand with Representative Tonko in defending the EPA and hope that his fellow Democrats join him in standing up for a budget that protects all Americans. If Republicans are driven to undermine vital environmental protections, then Democrats must stand in their way.”

John Sheehan, spokesman for the Adirondack Council, said, “The EPA has earned the respect and gratitude of Adirondackers over the past 20 years by reducing the air pollution that causes acid rain, smog and soot in the Adirondack Park. While a deadlocked and partisan Congress has refused to act to protect the environment and public health, EPA has used every tool at its disposal to prevent premature deaths, water pollution and mercury contamination. EPA’s budget should be expanded, not cut.”

Caitlin Ferrante, chapter coordinator for the Sierra Club Atlantic Chapter, said, “With the increasing threats from the changing climate already wreaking havoc across the United States, it is imperative that the EPA be funded at levels that ensure we are able to protect our air, water, and remaining wild places. The proposed rollback of our crucial environmental laws and regulations will endanger generations of New Yorkers, the air we breathe, and the water we drink. The Sierra Club Atlantic Chapter is proud to stand with Congressman Tonko in demanding that all New Yorkers and the natural resources that sustain the Empire State deserve continued federal protection.”

Jeremy Cherson, advocacy coordinator for Riverkeeper, said, “The EPA’s work is critical to the health of the Hudson River. Now, that critical work and funding is under threat from President Trump and Administrator Pruitt. Along with our partners, we will continue to fight the assault on our keystone environmental laws and hold polluters accountable. Riverkeeper thanks Representative Tonko for his opposition to all cuts to the EPA budget and encourages him to keep up the fight on behalf of New York’s clean water.”

William Cooke, director of government relations for Citizens Campaign for the Environment (CCE), said, “President Trump’s assault on fundamental environmental and public health protections is evident in his recent budget proposal. We are depending on our representatives in Congress to use their power of the purse to protect our land, air, and water from the President’s onslaught. CCE commends Representative Tonko for his outspoken leadership to save the EPA.”

The Save The EPA coalition of 110+ organizations was formed in June 2017 in response to President Trump’s proposed 31 percent cut to the EPA’s budget, and the confirmation of former Oklahoma Attorney General Scott Pruitt to lead the EPA. Mr. Pruitt, a fossil-fuel insider, has sued the EPA multiple times, prefers policies that benefit industry polluters, and has been hard at work dismantling critical environmental protections, many of which were put in place by former President Obama.