The following op-ed was published in The Post Standard on March 30, 2021 and was written by Rob Hayes, Director of Clean Water at EANY.

If your child came home with a C-minus on their report card, you might be disappointed. But if the pipes that delivered water to your home received a C-minus from plumbing professionals, you’d have cause for serious alarm.

C-minus is the grade given to our nation’s drinking water and wastewater infrastructure by the American Society of Civil Engineers (ASCE). According to their report, “There is a water main break every two minutes, and an estimated 6 billion gallons of treated water lost each day in the U.S.” 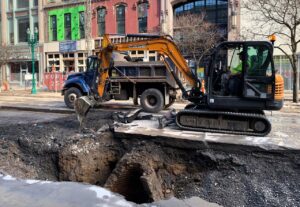 The steady decline of our water infrastructure across the U.S., and especially here in New York, has been widely documented. There were 234 water main breaks in Syracuse in 2018. There are also an estimated 15,000 lead service lines spread across the city, which connect water mains to your home’s internal plumbing. Every year, outdated wastewater pipes discharge millions of gallons of raw sewage into local lakes and rivers.

But these stats don’t convey the real harm that occurs when water infrastructure fails us. Water main breaks can shutter schools and businesses, cause homes to lose access to water, and lead to dangerous bacteria entering our drinking water. Lead service lines can leach neurotoxins into our drinking water, endangering early childhood development. You can become sick if you swim in lakes or rivers mixed with raw sewage.
And is it in any wonder why we’re in this position? Last summer following a water main break, one of three pipes currently used to supply the City of Syracuse with drinking water from Skaneateles Lake was unearthed. The pipe was installed in the 1890s, when Benjamin Harrison was the 23rd U.S. president.
It’s long past time to build the next generation of water infrastructure and ensure that every New Yorker is guaranteed clean, safe drinking water.

Our state government must play a critical role in this effort — and thankfully, we’re off to a good start. Since 2015, New York state has invested almost $4 billion to provide grants to communities in dire need of major water infrastructure improvements. Onondaga County has received over $15 million of funding from the Clean Water Infrastructure Act, including a $2 million grant to the City of Syracuse in 2019 to replace the roof over one of the city’s water tanks, which had partially collapsed the year before.

But there is much more work to do. Ten years ago, state agencies estimated that at least $80 billion needed to be invested to fix New York’s pipes. Much more state funding is needed, which is why we were pleased to see the governor and the state Legislature propose an additional $500 million for the Clean Water Infrastructure Act in this year’s state budget. Now it will be critical to quickly move this money out the door and into communities.
New York should seize the opportunity to boost our state’s water infrastructure from a C- to an A+. We can create thousands of good-paying jobs, spur our state’s recovery from the Covid-19 crisis, and build the infrastructure to support our communities for the next hundred years.