Albany – Despite convening nearly a year ago, and with an October 2 deadline looming, the state’s Drinking Water Quality Council has yet to make any recommendations for Maximum Contaminant Levels (MCLs) for toxic chemicals like PFOA, PFOS and 1,4-dioxane in drinking water.

Albany – Despite convening nearly a year ago, and with an October 2 deadline looming, the state’s Drinking Water Quality Council has yet to make any recommendations for Maximum Contaminant Levels (MCLs) for toxic chemicals like PFOA, PFOS and 1,4-dioxane in drinking water.  Governor Cuomo, who has the power to direct the Department of Health to move forward on regulating these chemicals, has yet to make any announcements.

PFOA, PFOS, and 1,4-dioxane, which can cause several types of cancer and other diseases, have harmed communities from Long Island to Hoosick Falls. The only way to ensure every New York community is safe from these dangerous chemicals – meaning every water supply is tested and response protocols are in place – is to establish MCLs.

Liz Moran, water & natural resources director for Environmental Advocates NY said, “The state can’t keep passing the buck on clean water. More than 1,000 days have passed since the residents of Hoosick Falls learned their drinking water was contaminated with PFOA. The only way to prevent future Hoosick Falls’ scenarios is to address the very chemicals polluting people’s water. Too much time has passed – New Yorkers deserve clean water safeguards now.” 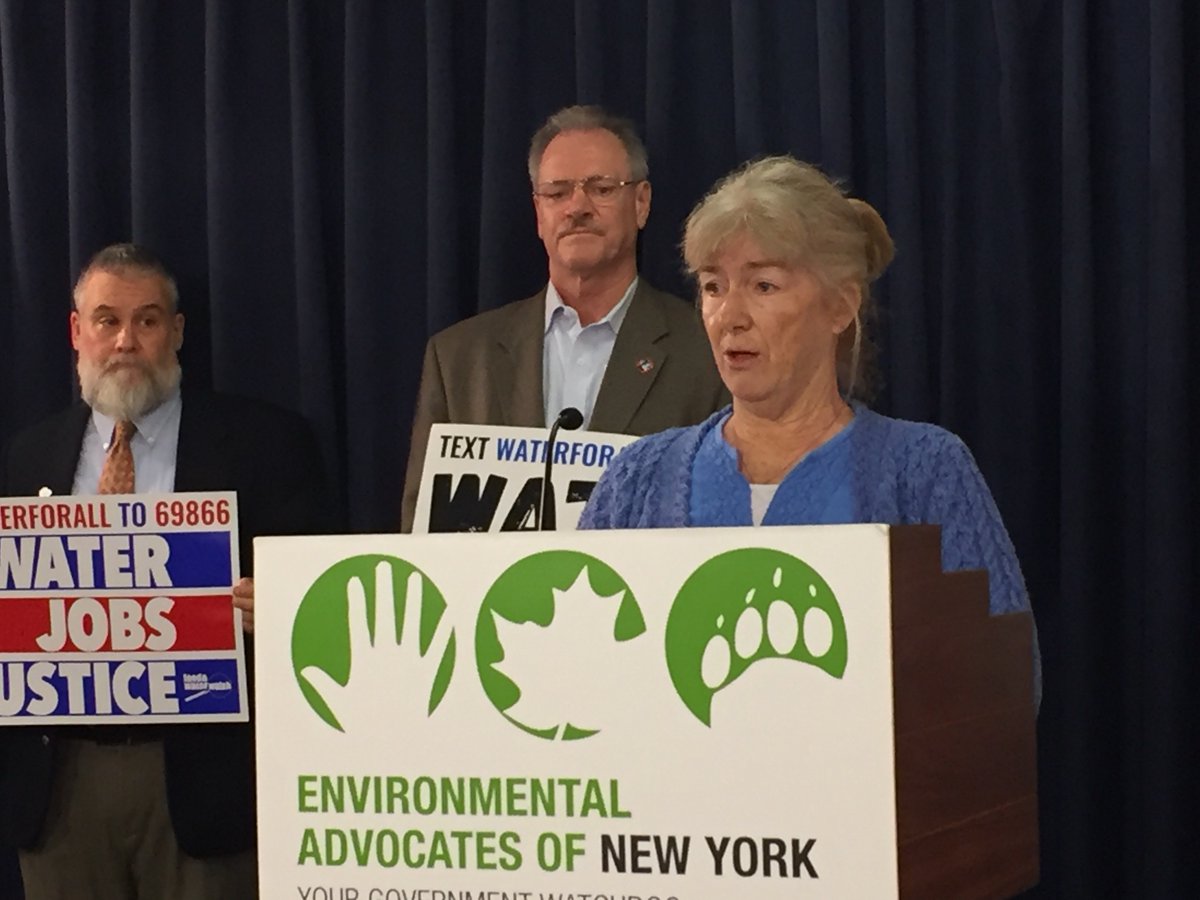 Cathy Dawson, Hoosick Falls resident and NYWaterProject member said, “As a nurse, when someone comes to me and my colleagues for help, we don’t wait to treat them. We jump into action and do what is necessary. Now while it’s true that Governor Cuomo isn’t a nurse, he is an elected official and is expected to do everything in his power to keep our water safe to drink. Unfortunately, by putting off setting low MCLs for the toxic chemicals that my family drank for years, he’s not meeting that basic expectation. For too long, thousands of New Yorkers have been waiting for Governor Cuomo to jump into action and protect our drinking water.”

Connie Plouffe, a resident of Petersburgh and member of the NYWaterProject said, “Our Governor is dragging his feet when it comes to clean water. As time goes by, more families could be putting themselves in danger just by turning on the tap. There is enough research and evidence to show that these chemicals are, and continue to be, a clear and present danger to our environment and to anyone exposed to them. For residents like me and my family, this is truly frightening. Other states have taken the lead to lower their guidance levels below EPA’s advisory level of 70 ppt – why hasn’t New York?”

Mary Wagner, Newburgh resident and member of the Newburgh Clean Water Project said, “As Newburgh residents, we are devastated by the fact that our drinking water has been contaminated by at least 12 different PFAS chemicals and that our city of nearly 30,000 residents has been exposed to these cancer-causing substances, presumably since the 1990s. We personally have friends and family members dealing with sudden-onset kidney failure and child development issues that may be linked to this poisoning. Our current access to NYC’s Catskill Aqueduct is a stopgap measure and our future water source is yet to be determined. Meanwhile our watershed—outside of our jurisdiction—is paved over with impermeable shopping plaza parking lots at a huge detriment to our ecosystem. We are working to restore our watershed and access to clean drinking water for current and future generations and will hold businesses and governments at all levels accountable. We encourage New York State to take a lead in classifying PFAS chemicals as toxic and enforce a strict maximum contaminant level (MCL) in line with recommendations from the CDC. Nothing short of our health and economic wellbeing are at stake. We urge Governor Cuomo to make this—the fight for our basic human right to clean water—a priority.”

Frank Natalie, business agent for UA, Plumbers and Steamfitters Local 7 said, “UA plumbers are committed and take pride in ensuring the proper installation of safe drinking water distribution systems. We install these piping systems in an array of building types and settings. Unfortunately, if the source water is found to be contaminated or poisoned, then these carefully installed systems are rendered useless. Learning that New York’s drinking water in some areas like Hoosick Falls and Long Island have been contaminated with dangerous levels of unregulated chemicals like PFOAs, PFOSs, and 1,4-dioxane is both shocking and concerning. Even more outrageous is that New York State’s Drinking Water Quality Council (DWQC), enacted by the legislature, has failed to address the problem or set Maximum Contaminant Levels (MCLs) concerning these dangerous chemicals, as they were tasked to do. We need to put our children, families, and communities foremost. Today we join in concert with concerned citizens, organizations, advocates, and the Environmental Advocates NY in calling for immediate action to be taken by the Department of Health and the Governor to ensure New York’s drinking water is safe beyond reproach.”

“On behalf of the NYS Association of Counties, the NYS Association of County Health Officials and the NYS Conference of Environmental Health Directors, we respectfully request the Department of Health to establish enforceable MCLs for 1,4-dioxane, PFOA and PFOS. The danger associated with this environmental contaminant is pronounced in this state. As the U.S. EPA is not likely to establish these MCLs in the near future, we ask the state to set the standards to protect public health and that more information can be obtained through water quality testing and reporting,” said Stephen J. Acquario, executive director, NYS Association of Counties.

Howard A. Freed, MD, former director of the Center for Environmental Health at the New York State Department of Health said, “Compared to nearby states, DOH has allowed New Yorkers to drink much higher levels of PFOA and other toxins. Unfortunately, that tendency to always minimize risk is a pattern of behavior that is doomed to fail the people of New York. The largest study ever done on the health effects of PFOA concluded that it is more likely than not that PFOA causes human disease, including kidney and testicular cancer. The Department of Health should not wait for what they consider conclusive proof of harm, especially when the conclusions of the largest study ever done is not enough proof for them.”

Kim Ong, staff attorney for NRDC said, “PFOA and PFOS are forever chemicals—once they get into our water, they won’t ever leave. It’s time for New York State to follow in the footsteps of New Jersey and Vermont and set a maximum contaminant level for PFOA and PFOS. The science is clear—we need to get these dangerous chemicals out of our water.”

Russ Haven, general counsel for NYPIRG said, “That PFOA, PFOS and 1,4-dioxane must be regulated in parts per trillion and parts per billion speaks volumes about how dangerous they are.  New York’s abundant supplies of clean drinking water are imperiled by a century of industrial activities and the development of widely used toxic chemicals. In the face of aggressive dismantling of federal environmental protections, New Yorkers are looking to Albany to protect our health and take action so we can have peace of mind about the quality of the water that comes out of the kitchen faucet.”

Nisha Swinton, senior organizer for Food and Water Watch said, “From the delays in response to the Hoosick Falls contamination crisis, to the perpetually stalled Drinking Water Quality Council, Cuomo is clearly failing on clean water. New York needs a comprehensive plan to deal with water contamination from PFOA and similar chemicals. In addition to securing permanent sources of clean drinking water for the affected communities, New York must follow states like Vermont and New Jersey and set maximum contaminant levels that are stronger than the federal guidelines proposed by the EPA. The time for talking is over; Governor Cuomo must take action to protect our access to clean, safe drinking water.”

“I can’t think of any function of government more fundamental than ensuring that the water that comes out of our taps doesn’t harm us,” said Bob Cohen, Policy Director of Citizen Action of New York and a Rensselaer County resident. “We can’t count on President Trump and the current EPA to protect us. Governor Cuomo must act immediately to ensure that disasters like Hoosick Falls don’t happen again, by issuing state clean water standards that are much stronger than the EPA recommendations.”

“We urge the Department of Health to establish strong standards for chemicals in drinking water such as PFOA, PFOS and 1,4-dioxane” said Kathleen Curtis, Executive Director of Clean and Healthy New York. “New York needs to be a leader on drinking water protection for numerous emerging contaminants, and provide strong safeguards to public health. This is particularly crucial now, given EPA’s failure to enact such protections and the current federal administration’s broad attacks on environmental protections.”

Dan Shapley, water quality program director for Riverkeeper said, “New York needs to set aggressive limits on these contaminants in drinking water to protect public health. It’s one of the most critical steps in a comprehensive approach to addressing the complicated challenge posed by these chemicals.”

In an effort to address current, and prevent future, water contamination crises statewide, Governor Cuomo and the legislature joined together to create the Drinking Water Quality Council, appointing members in September of 2017. The Council was charged with providing recommendations to establish MCLs for potentially toxic chemicals which have been discovered in drinking water in communities from Hoosick Falls to Long Island. The first meeting was on Long Island on October 2, 2017, with two subsequent meetings occurring in November 2017 and February 2018.

The last scheduled Council meeting has been postponed since March 19. By statute, the state must give their recommendations one year following their first meeting, which is now less than one week away.

The Environmental Protection Agency (EPA) has guidance levels for PFOA and PFOS in drinking water at 70 parts per trillion (ppt). However, following the release of a federal report that was labeled a “potential public relations nightmare” by the Trump administration, science has since found EPA’s guidance level is far higher than what is actually safe for public health. The Agency for Toxic Substances and Disease Registry (ATSDR) suggests levels should be at least 10-times lower.

Residents and organizations joined together today to renew their call, which first began in February 2018, to Governor Cuomo and the Department of Health to move forward with the following: