Since August, eight local governments representing a majority of all New Yorkers have now enacted or introduced bans. Other municipalities have passed resolutions urging their county officials to enact a ban due to the costly havoc microbeads wreak on New York’s aging wastewater infrastructure.

Albany – Today, legislation was introduced in the New York City Council which will ban the sale of products made with microbeads – the tiny plastic pellets that come by the tens of thousands in bottles of products like face wash and toothpaste.

Since August, eight local governments representing a majority of all New Yorkers have now enacted or introduced bans. Other municipalities have passed resolutions urging their county officials to enact a ban due to the costly havoc microbeads wreak on New York’s aging wastewater infrastructure.

Local bans are popping up due to the state Senate’s failure to pass the Microbead-Free Waters Act. That bill passed the Assembly with overwhelming bipartisan support by a vote of 139-1. The Senate’s version was sponsored by 59% of all senators. However, despite promises of focusing on the “people’s business,” new Senate Majority Leader John Flanagan (R-Long Island) refused to allow a fair vote. Instead, the statewide ban 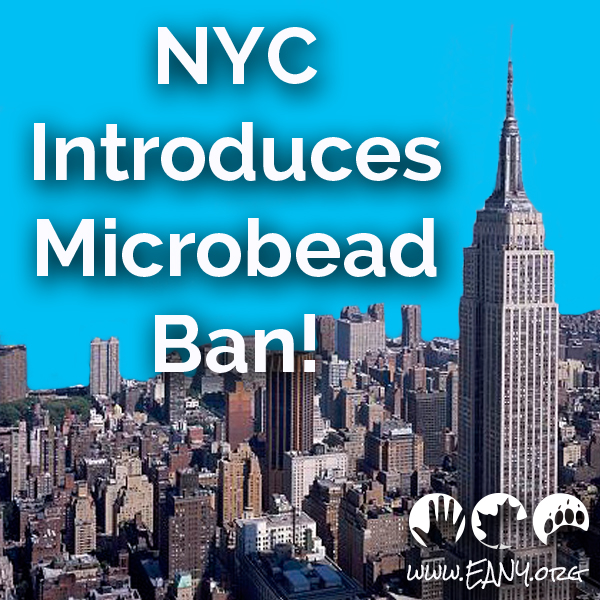 remains stalled in the Environmental Conservation Committee as the lead sponsor, Senator Tom O’Mara (R-Big Flats), put his energy behind an industry-backed bill for which he was the lone supporter. That effort failed.

Saima Anjam, environmental health director at Environmental Advocates NY said, “Microbeads are a needless industry waste that wreaks havoc on our waterways and wastewater treatment systems, and which ultimately harms wildlife and public health. I hate being the bearer of bad news, but despite the marketing, not a single New Yorker is cleaner or more beautiful today because of plastic pellets in their face wash or toothpaste. Microbeads are as pointless as they come.”

She added, “What we’re seeing are local governments and leaders stepping in to fill the void the Senate has created, giving New Yorkers the leadership they expect. Republicans and Democrats, officials in rural and urban areas alike, recognize the need to act and have chosen not to ignore the consequences. We applaud them, because that’s what residents want and deserve. It is unacceptable that industry continues to recklessly pollute our waterways with microbeads. Senator Flanagan needs to keep his promise in 2016 and let senators pass the Microbead-Free Waters Act.”