Environmental Advocates NY has released a new report – Tapped Out: New York’s Clean Water in Peril – which documents sewage overflows and the rampant underreporting of such spills in New York State. The report also documents how underinvestment has lead to a crumbling infrastructure and increased sewage discharges in New York waterways.

Albany – Environmental Advocates NY has released a new report – Tapped Out: New York’s Clean Water in Peril – which documents sewage overflows and the rampant underreporting of such spills in New York State. The report also documents how underinvestment has lead to a crumbling infrastructure and increased sewage discharges in New York waterways.

A review of data published through the Department of Environmental Conservation (DEC), in accordance with the Sewage Pollution Right to Know Act of 2012, shows that between May 2013 and June 2015, 2,696 sewage overflows were reported.

While that figure is large, is it likely a fraction of the true number of overflows happening statewide. Data which demonstrates an inconsistent or outright lack of reporting includes:

Tapped Out can be found online.

Liz Moran, water and natural resources associate at Environmental Advocates NY, and author of Tapped Out, said, “There is a sacred bond between clean water and public health that is being broken. In 2012, state legislators passed the Sewage Pollution Right to Know Act, a common-sense law that says, 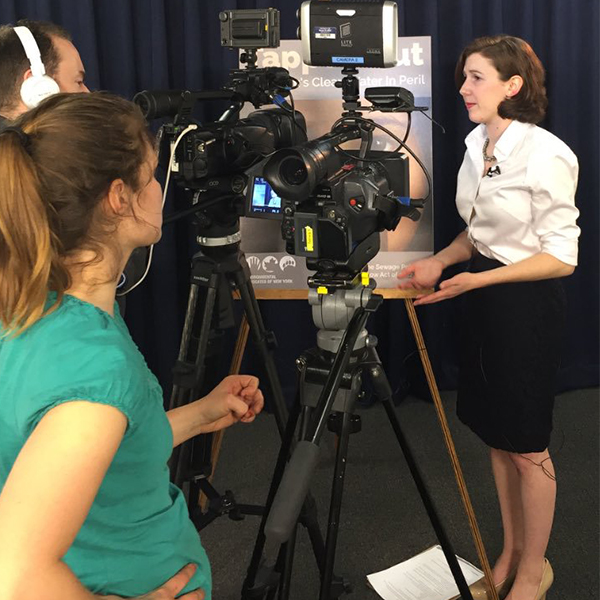 knowing the public health dangers, if a sewage discharge occurs, the public must be immediately notified. A law like this is necessary due to the lack of investment in an aging and failing system which dumps tens of billions of gallons of raw sew­age into local waterbodies every year.”

She added, “Although what we found is that after 3.5 years, the law has not been fully implemented, lacks standardized reporting requirements, and that while these numbers seem staggering, they are likely a fraction of the true spills occurring statewide which go unreported. The experts at DEC, and wastewater operators, are doing everything they can with what they have – but cuts to agency resources and an ongoing lack of investment in clean water infrastructure is placing public health at risk.”

The Sewage Pollution Right to Know Act took effect in May 2013. Nearly three years later, the DEC has yet to finalize regulations intended to provide standard reporting requirements for all communities – the lack of regulations is affecting the quality of the data that is in the Right to Know database.

The public health dangers of untreated sewage include waterborne pathogens, parasites, and disease-causing organisms such as E. coli and Rotavirus. When overflows into local waterways occur – which are common when precipitation and sewage enter the same system, or when a system fails due to age – it leads to boil water alerts and waterbodies closing for recreation and human activity due to the potential for sickness and even death.

A 2013 analysis of water samples collected at New York beaches found that 13 percent exceeded the EPA’s Beach Action Value (BAV), which determines if a waterbody is safe for human activity.

Water infrastructure needs in New York State are enormous – the DEC stated in a 2008 report, A Gathering Storm, that over the next twenty years $36 billion will need to be invested in our wastewater infrastructure for all of the necessary repairs and upgrades.

According to the Environmental Protection Agency’s (EPA) Clean Watershed Needs Survey, New York State has the greatest documented wastewater infrastructure needs in the country, which includes the third highest investment need in the nation to reduce sewage overflows and stormwater pollution. And a 2014 report from the Office of the New York State Comptroller, Growing Cracks in the Foundation, found that there was an $800 million annual funding gap for sewer infrastructure needs.

1)    Staff funding for DEC must be increased to ensure New York has enough cops on the beat to enforce laws and protect public health. The current shortcomings of the Sewage Pollution Right to Know Act are the result of inadequate funding that would ensure communities are following consistent standards and have the technology available to accurately track and report discharges. Additionally, too few resources are available to DEC experts to finalize and implement current draft regulations.

2)    Final Sewage Pollution Right to Know Act rules should include:

3)    Governor Cuomo and Legislators should invest at least $800 million annually in the New York State Water Infrastructure Investment Act of 2015 (NYSWIIA), a budget line created in the SFY2015-16 Budget. NYSWIIA must be permanently extended beyond its three-year life to create an ongoing commitment to clean water in New York State.