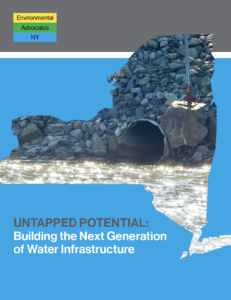 Rob Hayes, Director of Clean Water with Environmental Advocates NY and author of the report, said, “New York’s water infrastructure is under increasing strain from the climate crisis, such as the devastating flooding caused by Hurricane Ida. By boosting investments to fix our pipes, Governor Hochul and the State Legislature can build New York’s climate resiliency and seize a once-in-a-generation opportunity to protect public health and grow our economy.”

EANY, in partnership with other environmental organizations, labor unions, and water utility associations, has called on Governor Hochul to include at least $1 billion for the Clean Water Infrastructure Act (which funds WIIA) in the upcoming state budget, and to continue getting currently-backlogged Clean Water Infrastructure Act funding out the door.

The call for state action comes just after a landmark infrastructure bill passed the US Congress. The Infrastructure Investment and Jobs Act will provide over $45 billion over the next five years to prevent water main breaks, combat sewage overflows, and remove toxic chemicals from drinking water nationwide. However, the majority of this funding is in the form of loans, which many financially-struggling water utilities cannot afford. By boosting grant funding for WIIA, New York will help make repairs affordable for disadvantaged communities.

Toplines from the Report

Between 2015 and 2019, WIIA awarded nearly $1.2 billion in grants, jump-starting over 600 projects in every county outside of New York City. But the demand from local governments has been so high that dozens of shovel-ready projects go unawarded each year. What’s more, former Governor Cuomo’s administration stopped awarding new WIIA grants when the COVID-19 pandemic hit; the program has a lot of ground to make up.

For example, projects in Erie County received close to $10 million in grants in 2019. The Town of Grand Island received over $600,000 of that total to upgrade its sewer mains and other wastewater infrastructure. With demand in Erie County so high, however, some shovel-ready applications did not receive the funding they needed. The Village of Angola did not receive a $3 million grant it requested in 2019 to upgrade its drinking water infrastructure.

Assembly Environmental Conservation Committee Chair Steve Englebright said, “Six years after we in the Assembly spearheaded the Water Infrastructure Improvement Act, I am proud to see that it has developed a track record of success. As we grapple with drinking water contamination and other water quality issues, these state grants deliver the infrastructure upgrades needed to ensure clean water for every New Yorker and reduce reliance on the local property tax. But there is still more work to do. I will work to add new funding for the Clean Water Infrastructure Act in the upcoming state budget.”

State Senator Shelley Mayer said, “The Water Infrastructure Improvement Act instituted a solid grant program that is essential to addressing the critical need to repair and enhance our water infrastructure. In the past it has funded some much-needed projects, but the extended delay in getting funding out the door during the pandemic has hampered our communities’ ability to move forward with overdue upgrades. I applaud Governor Hochul for taking steps to release this money to municipalities, but there is still a significant backlog. The flooding from Hurricane Ida is an unfortunate illustration of the shortcomings of much of our current water infrastructure, and is an indication that the demand for WIIA funding will only increase. We must be focused on dedicating more resources to fulfill this important need.”

Assemblyman Steve Otis, a proponent of the WIIA program, said, “Through their series of reports, Environmental Advocates has tracked New York’s significant investment through clean water grants since 2015 and has documented the ongoing need for clean water funding. In order to address the needs presented by aging infrastructure and storm resilience, we need to continue New York’s position as the national leader in supporting local water project funding.”

“This report quantifies the enormous scale of New York’s water infrastructure crisis and the value of Clean Water Infrastructure Act grants to local governments,” said Mike Elmendorf, President & CEO, Associated General Contractors NYS. “We owe it to New Yorkers to continue investing in clean water infrastructure now to generate job-creating opportunities for our communities and our future. Keeping our water healthy and safe is essential for our citizens particularly as we continue to recover from the COVID-19 pandemic.”