“Each person shall have a right to clean air and water, and a healthful environment.”

Albany – Today, Environmental Advocates NY, legislative leaders, and advocates, called for an amendment to the State Constitution that would guarantee New Yorkers a right to clean air and water. Comprised of 15 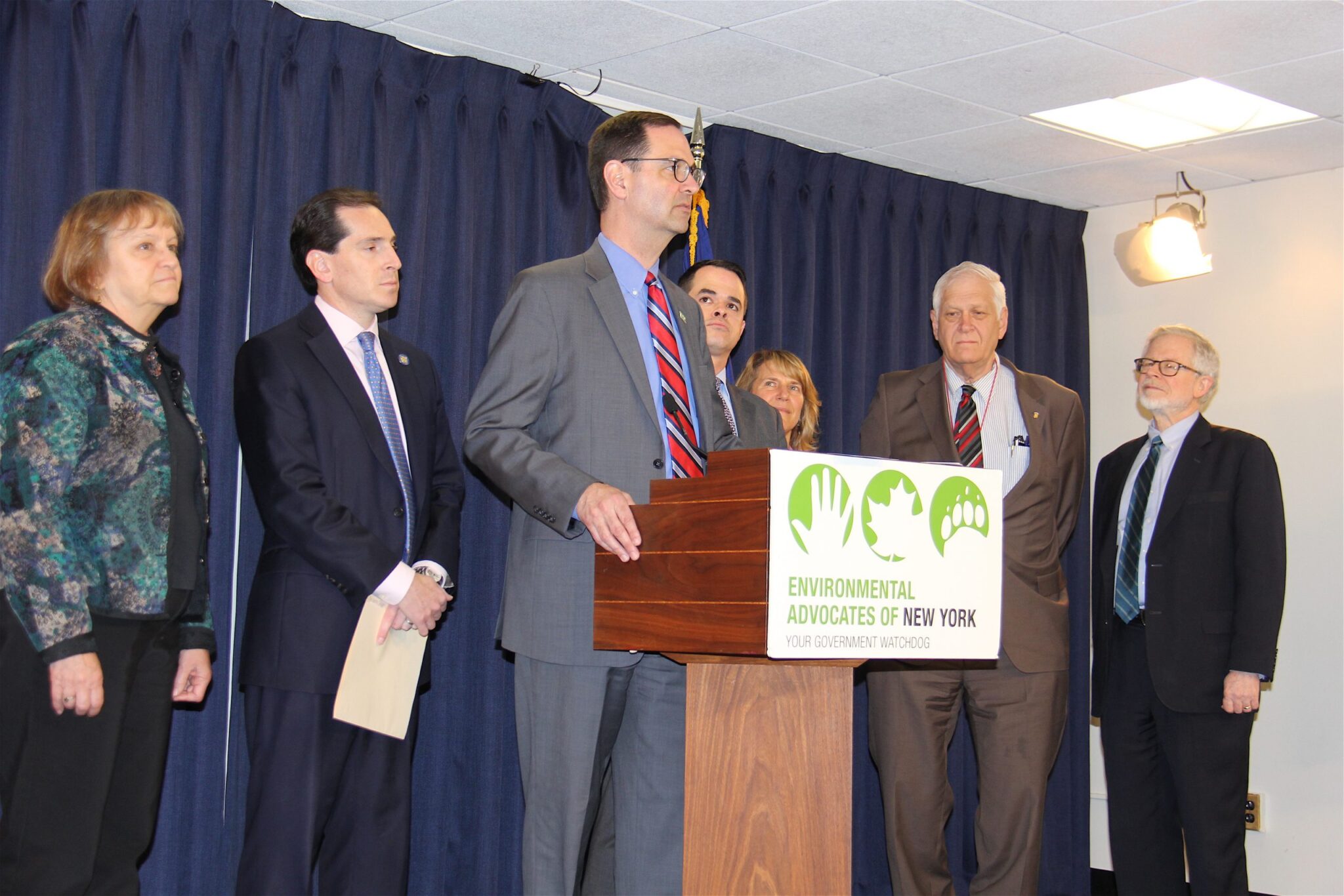 words, this ‘Green Amendment’ would amend Article 1 of the State Constitution to include: “Each person shall have a right to clean air and water, and a healthful environment.”

Additionally, 90 advocate groups have called on the state Legislature to support the bill. A letter in support released today states that the amendment, “will drive better government decision-making at all levels of government and

will prevent situations or conditions in which water becomes too polluted, air too dirty, land too contaminated, and natural landscapes too decimated to support healthy lives, including a healthy economy.”

New York’s Green Amendment (A.2064/S.2072) is sponsored by Assemblyman Steve Englebright and Senator David Carlucci. The amendment has passed in the Assembly for the past two years, but has not yet receive a vote in the Senate. In order for the New York State Constitution to be amended, the amendment must be passed by both the Assembly and Senate in two consecutive legislative sessions. It must then pass a statewide voter referendum.

“Our state’s constitution must be brought into the 21st century and guarantee every New Yorker the basic and fundamental rights to clean air, water and a healthful environment. Our state’s constitution has protections to worship, assemble and even play bingo. It’s time environmental protections be there too for our residents,” said David Carlucci Chairman of Committee on Mental Health and Developmental Disabilities and bill sponsor.

“This measure is beautiful in its simplicity, a Constitutional amendment to ensure that clean air and water and a healthful environment are treated as fundamental rights that protect the overall health of the people and the environment,” said Steve Englebright, Assembly Environmental Conservation Committee Chair and bill sponsor.

“The right to clean air and water is fundamental — and that is why it is critical for us to codify these principles into our State’s constitution. I am proud to cosponsor this vital measure because New Yorkers deserve no less,” said Todd Kaminsky, Senate Environmental Conservation Committee Chair Senator and co-sponsor.

“New York has one of the most progressive State constitutions in the country, including explicit protections for public health and social welfare. This bill builds on it with strong environmental protections, particular clean air and water requirements that are long overdue,” said Richard N. Gottfried, Assembly Health Committee Chair and co-sponsor.

“Access to clean air and clean water is a fundamental human right. It should be enshrined in our State Constitution. The Green Amendment would protect our planet, and ensure that all New Yorkers are shielded from the environmental and public health hazards that disproportionately affect low-income and underserved communities across our state. Nothing could be more important, “ said Brad Hoylman, Senate Judiciary Committee Chair and co-sponsor.

“The New York State Constitution guarantees our right to play BINGO, but is silent on our right to breathe clean air or drink clean water. This is a shocking omission that we will begin to correct today. New Yorkers undeniably havea right to clean air, clean water, and a healthful environment; we’re going to make sure our State Constitution reflects that truth,” said Peter Iwanowicz, executive director of Environmental Advocates NY.

“Most people are shocked to learn that while they have a right to free speech and freedom of religion, they do not have a right to clean water, clean air and a healthy environment. This is true in New York just as it is true in statesacross the nation. New York is poised to change that and to become only the third state in the nation to recognize and protect the inalienable right to a healthy environment in the bill of rights section of its state constitution. Only Pennsylvania and Montana have constitutional provisions of this kind. Passage of a Green Amendment in New York would not only provide much needed environmental protections for the people of the state, but it would serve as an inspiration to other states to do the same. Other states currently on this path are New Jersey and West Virginia,” said Maya van Rossum, the Delaware Riverkeeper, as well as author of the Green Amendment and founder of the Green Amendment movement.

“This bill ensures that all New Yorkers have the right to clean drinking water, clean air and a healthy environment by investing in water infrastructure and new energy technologies while preserving the responsible oversight of our parklands. We strongly encourage passage of this bill to not only build a healthier environment for our future, but to create good middle-class jobs in the process,” said Mario Cilento, president of the New York State AFL-CIO.

“The health, economic stability and overall wellbeing of New Yorkers, indeed all people, depends upon access to clean water, clean air and a healthy environment. Amending the New York State Constitution to elevate these environmental rights as inalienable will provide New Yorkers with renewed force to the rule of law,” said Elisabeth Radow, Chair of the NYS League of Women Voters’ Committee on Energy Agriculture and the Environment.