Legislation Would Protect Millions of New Yorkers From Toxic Chemicals

Albany – Today, organizations representing local governments, parents and teachers, and communities harmed by PFAS pollution called on Governor Kathy Hochul to sign S.1759A/A.126A into law. This follows over 40 organizations sending a sign-on letter on September 24 urging the Governor to do the same. 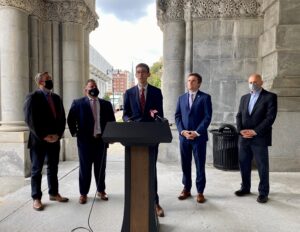 Sponsored by Senator James Skoufis and Assembly Health Committee Chair Richard Gottfried, this bill ends the uncertainty of millions of New Yorkers who don’t know if their water is safe to drink by requiring statewide testing for 40 toxic, emerging contaminants. The bill applies to all water utilities, including those that have never previously tested for any emerging contaminants due to their small service areas (serving approximately 2.5 million New Yorkers in total).

This September marks the five year anniversary of the “Water Quality and Contamination Hearing” held by the NYS Legislature in response to water crises in Hoosick Falls and elsewhere. Following that hearing, New York enacted the Emerging Contaminant Monitoring Act (ECMA) in 2017, to ensure New Yorkers would not be kept in the dark if their water was polluted. Four years later, however, the NYS Department of Health (DOH) has still not published a list of emerging contaminants for every water utility to test for and notify the public about, as the law requires. This bill will finally create that list, jump-start testing, and inform New Yorkers about what’s in their water.

Over the last several years, contamination events across New York have revealed the need for comprehensive, statewide drinking water testing. Cancer-causing PFAS chemicals, for example, have been detected at dangerous levels in Newburgh, Petersburgh, Rockland County, Poestenkill, and dozens of communities on Long Island. In response, this bill will establish the most rigorous monitoring program for toxic PFAS chemicals in the country.

The bill’s proactive approach to ensuring the drinking water safety garnered broad bipartisan support in the State Legislature. In June, the State Senate passed the bill 54-9, and the Assembly approved it by a vote of 127-20.

Rob Hayes, Director of Clean Water at Environmental Advocates NY said, “Communities across New York have waited for four long years to find out what’s in their water. Now Governor Hochul has the chance to make things right. Expanding drinking water testing will protect public health and ensure New Yorkers feel safe when they turn on the tap. We urge Governor Hochul to listen to communities that have been impacted by PFAS and other toxic chemicals and sign this bill into law as soon as possible.”

“For decades, residents of this state have suffered the consequences of hidden contamination sources, including many of my Hudson Valley constituents. New York can’t afford to drag its feet on the health and safety of its families any longer: we must stay ahead of the game in terms of identifying, monitoring, and eliminating new drinking water contaminants by strengthening testing requirements for water systems statewide,” said Senator and bill sponsor James Skoufis, “I am proud to have helped move this legislation across the finish line, and urge Governor Hochul to do right by the people of New York by signing this bill.”

“New York should be a clean water leader,” said Assembly Health Committee Chair and bill sponsor Richard N. Gottfried. “We must have the strongest commitment to identifying dangerous chemicals and implementing testing and remediation when necessary, including monitoring emerging science about these risks.  In 2017 the Legislature and Governor agreed that the Health Department should establish an Emerging Contaminant Monitoring List. Four years later we don’t have one. It’s time to enact such a list as the first step toward setting scientifically-appropriate levels for public notification and remediation of dangerous chemicals.”

“No one should ever have to worry whether or not their drinking water is safe, but as we’ve seen in Flint, Michigan, Hoosick Falls and countless others places – what we don’t know can hurt us. Clean drinking water is a basic human right, but sadly it’s often the poorer and disadvantaged communities who are left behind and left in the dark,” said Albany County Executive Daniel P. McCoy. “It’s time that we change that by closing a dangerous loophole and ensuring all public water systems are monitored for toxic chemicals. I commend the State Legislature and our environmental advocates for getting this bill passed.”

“Clean water is not a political issue, it is a basic human right,” said Eric Wohlleber, Poestenkill Town Councilman and Deputy Supervisor.  “Unfortunately my community of Poestenkill has become the latest to find contamination in our water, and sadly we know our town will not be the last. New York State must be a national leader in ensuring clean water for its citizens. I urge Governor Hochul to sign this legislation into law, through her leadership and vision we can lay the groundwork for not only safe water but for the health of millions of New Yorkers.”

Loreen Hacket, co-chair of the Hoosick Falls Community Participation Working Group said, “Through testing, we learned there are many, many more than the only two PFAS in our water that NYS has regulated. Not just in our water, but in the bodies of our children and families. As we in Hoosick Falls near the end of the long process to establish new drinking water wells for our community, statewide testing for these additional contaminants, many of which share the same toxic health effects as PFOA and PFOS, will ensure we have a more complete picture before one shovel hits the ground. Further delay in signing this bill could dreadfully delay that process as well, yet avoidable should the Governor sign this bill expeditiously.”

Tamsin Hollo, member of the Newburgh Clean Water Project said,“Testing works. Here in Newburgh, the federal requirement to test for emerging contaminants identified our PFAS contamination. Now Governor Hochul needs to ensure other, smaller communities across the state receive that same testing. The longer we wait, the greater the chance that people could get sick. We can’t repeat the crisis we went through in Newburgh and watch other New Yorkers develop cancer and other deadly illnesses. I urge Governor Hochul to show national clean water leadership and sign this bill into law as soon as possible.”

Peggy Kurtz, Co-Founder of the Rockland Water Coalition said, “In Rockland, 8 PFAS chemicals have been detected in our water. And yet, after ten months, we still don’t know the full extent of the contamination because our water utility has not tested for all the PFAS chemicals for which tests exist. It’s not enough to test only for the two PFAS chemicals regulated in New York. Scientists are telling us that many of the unregulated PFAS chemicals are every bit as toxic as the two that are now regulated, and pose serious risks to infants and small children. With this bill, testing for all detectable PFAS chemicals would finally begin. We thank Senator Skoufis and Assemblymember Gottfried for their leadership in sponsoring this critical legislation. I urge Governor Hochul to swiftly sign this bill into law.”

“After years of sounding the alarm and educating municipalities surrounding Seneca Lake and the Finger Lakes Region about the dangers of PFAS, we’re thrilled that a bill requiring the NYS Department of Health to start testing for PFAS chemicals and other emerging contaminants in our drinking water has passed both houses with overwhelming bipartisan support,” said Joseph Campbell, President of Seneca Lake Guardian. “We applaud Senator Skoufis and Assemblymember Gottfried for taking the lead on this issue, and are hopeful that Governor Hochul will sign this bill into law immediately in an effort to inform all New Yorkers of what’s in their water and, with the appointment of the new Commissioner, the DOH will now be more responsive to the public and begin remediation of these sites.”

Stephen Acquario, Executive Director of the NYS Association of Counties, said, “No New Yorker should have contaminated drinking water. Testing is the first step in detecting potentially dangerous contaminants in our drinking water so they can be monitored and remediated. We commend Senator Skoufis and Assemblymember Gottfried for sponsoring this legislation and urge Governor Hochul to once again act on her commitment to protecting public health by signing this legislation into law and enacting the most comprehensive PFAS monitoring program in the United States.”

“Clean water is critical for the health, safety and wellness of our children,” said Dana Platin, President of the NYS Parent Teacher Association. “We applaud Senator Skoufis and Assemblymember Gottfried for championing children’s health, and urge quick action from Governor Hochul to ensure this important and necessary bill becomes law.”

Liz Moran, New York Policy Advocate at Earthjustice said, “Every New Yorker deserves to know what’s in their water. Five years have passed since New York State first promised to heighten transparency by proactively testing for dangerous unregulated contaminants in all public drinking water supplies. Such a policy is critical to protect public health and prevent drinking water contamination crises. Now, Governor Hochul has the opportunity to finally fulfill this promise and right this wrong by signing A.126-A/S.1759-A into law.”

Victoria Leung, Staff Attorney of Riverkeeper, Inc. said, “The first step to protect public health is transparency about what is in our drinking water, and this bill will move New York closer to fulfilling DOH’s long overdue mandate under the Emerging Contaminants Monitoring Act. Testing for emerging contaminants allows potential contamination to be discovered and addressed earlier, reducing harmful effects on our communities. The sooner Governor Hochul enacts this law, the sooner New Yorkers’ health can be protected.”