New York, NY – The “Fix the Subway” coalition marked its official launch in Union Square Tuesday as a vast assortment of grassroots organizations came together to build momentum for a new source of funds capable of raising tens of billions of dollars to modernize New York’s ailing public transit system.

New York, NY – The “Fix the Subway” coalition marked its official launch in Union Square Tuesday as a vast assortment of grassroots organizations came together to build momentum for a new source of funds capable of raising tens of billions of dollars to modernize New York’s ailing public transit system. Citing near daily train delays and service meltdowns interrupting New Yorkers’ lives, organizations with missions ranging from workers’ rights, civil rights, economic equality, street safety, environmental justice, as well as a clean environment and a reliable commute, announced a push on the governor and state legislators in the run up to next year’s state budget. The group supports congestion pricing to help pay for the implementation of the MTA’s Fast Forward plan, which would modernize the subway’s 1930sera signal technology and replace subway cars from the 1960s and 1970s, and install elevators across the system. 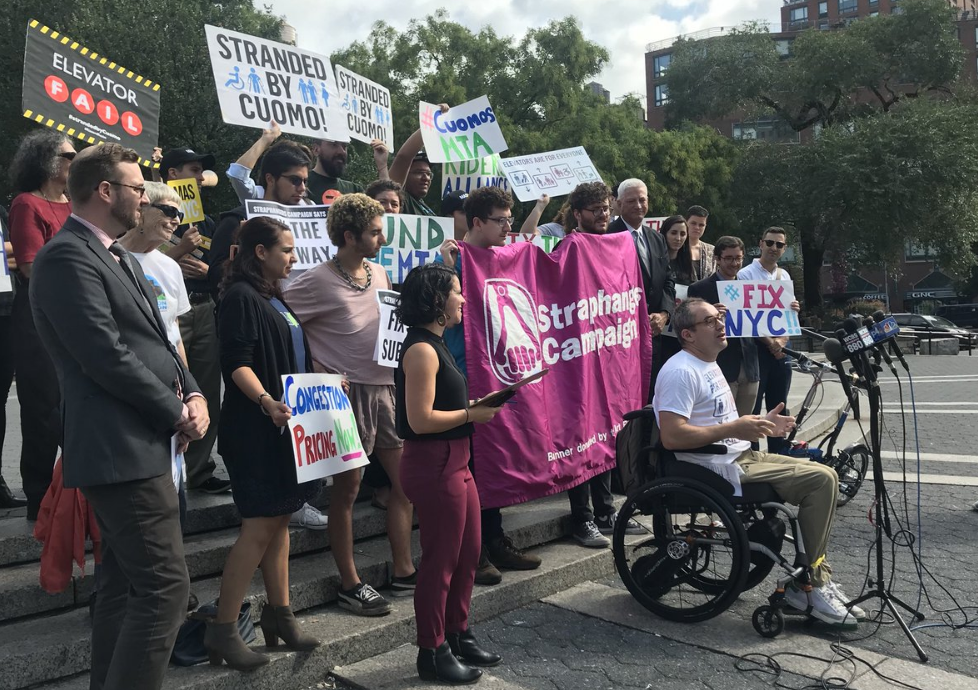 No longer, the groups say, can New Yorkers with other priorities afford to just sit on the sidelines while the transit system that whole city relies on goes down the tubes. Instead, these organizations with highly disparate progressive missions, will join up as a coalition to fight for congestion pricing to fund the MTA’s Fast Forward transit modernization plan.

Congestion pricing, predicted to raise up to $1.7 billion from cars and trucks entering Manhattan south of 60th Street, would go a significant distance toward the tens of billions required to fix the subway over a decade or more. Today’s announcement by a broad coalition of progressive groups confirms that congestion pricing is itself a progressive policy initiative. Citywide, households with cars earn twice those without cars. The Tri-State Transportation Campaign found only 4% of outer-borough commuters would pay a daily congestion charge. The Community Service Society found only 2% of working poor commuters would pay the charge. Outer-borough commuters who drive to work in Manhattan not only pay for their cars, gas, and insurance, they also pay for parking and time lost in unpredictable traffic, a price comparatively few New Yorkers can afford. The majority of commuters into Manhattan rely entirely on the city’s ailing transit system to get to work and home again.

In pursuit of their goal of congestion pricing as a means to pay for fixing the subway, the assembled groups vowed to hold public events and private discussions with government officials, building broad-based momentum toward next year’s state budget. The budget cycle, which officially kicks off with the governor’s address to the legislature in January, will wind up in March with a fiscal year 2020 state budget due by April 1. While congestion pricing has also been proposed in standalone bills in prior years, a revenue measure with such a significant impact on the state’s economic engine, is seen as most likely becoming part of the overall budget deal between the governor and legislature.

Christine Auwarter, a member of the Riders Alliance, said: “My commute should be 30 minutes, but I now leave about an hour early for work, so that I have time for delays and crowded trains. On some days, I’ll watch 3 or 4 trains go by that are so packed, not a single person on the platform can get on. And I know that experience is not new to anyone. That’s why I’m happy to see this diverse crowd and list of organizations because it shows how vital the subway is to everyone’s lives here in New York. I calling on Governor Cuomo and my elected representatives in Albany to make sure the plan is fully funded and I encourage all my fellow subway riders to do the same.”

Peter Iwanowicz, executive director of Environmental Advocates NY, said: “Congestion pricing doesn’t just make sense as a way to fix our subways, it would have a positive impact on the health of New Yorkers as well. A thriving mass transit system funded by a plan that also reduces tailpipe pollution is a win-win for everyone who enjoys breathing clean air.”

Maritiza Silva-Farrell, Executive Director of ALIGN-NY said: “No-one can question it’s time to Fix the Subway. Generating up to $1.7 billion a year with congestion pricing is an essential step to get New Yorkers moving again.”

Eddie Bautista, Executive Director of the New York City Environmental Justice Alliance, said: “New York City transit is the life blood of the city, especially for communities of color and residents of low-income communities who rely on the subway to get to work and job opportunities, to visit their ailing parents, to spend quality time with their friends, to take care of their personal health, among a myriad of other activities. But as our subway system continues to decline in service and reliability those normal, everyday activities become a new source of stress and unnecessary barriers for New York’s most vulnerable communities.”

Rachel Rivera, a member of New York Communities for Change, said: “Like millions of working New Yorkers, I rely on the subway every day. I rely on the subway to pick up my kids, to visit my family and to get to work. I have seen our subway system crumbling before my eyes with delays and hazardous infrastructure. We cannot afford another fare increase, especially not a time when our subways are neither safe or reliable. Governor Cuomo must fully fund the MTA by passing a millionaires tax and congestion pricing that can create sustainable funding stream and fix our subways.”

Gus Febles, a CUNY student and member of the Straphangers campaign from Brooklyn, said: “Being a student is hard enough without having to worry about whether or not we can get to class on time. When the trains are delayed and we’re late for class, we end up being kept from opportunities for advancement.”

Jaqi Cohen, Campaign Coordinator for the Straphangers Campaign, said: “New York City’s subways are falling apart. Service disruptions and frequent delays have become all too common, contributing to what has become a daily nightmare for many of New York City’s riders. New Yorkers across the five boroughs are counting on Governor Cuomo and legislators in Albany to enact a sustainable congestion pricing plan in this year’s budget. The fate of New York’s overburdened subway system depends on it.”

Samuel Santaella, TransAlt East Queens Activist, said: “Congestion pricing is important to me because transit is important to me. I live in an area where, even though there may be more people driving than in other parts of the city, the majority are still transit users, including myself. We endure long subway rides, made longer by seemingly endless delays. Why, for example, does the E train crawl its way through Queens Boulevard and into Jamaica Center in the evening? There’s also the bus journeys – which we need because the subway only goes so far. Little do we understand that being stuck at bus stops, red lights, and too many other cars is the reason why buses are frustratingly slow and late, both in Queens and in Manhattan where a small bus trip may help us finish our long journey. Congestion pricing will help fund the possibility of making transit effective. Just as transit service needs to be robust to be effective and dependable, the funding stream needs to be just as robust. We need guarantees, not promises. And we need solutions that actually work.”

Paul Steely White, Executive Director of Transportation Alternatives, said: “Our transportation system is in a state of crisis. Chronic inadequate support has crippled the subway and bus networks. Streets are increasingly clogged with traffic, which results in buses that travel at walking speeds, delayed deliveries, and over a hundred pedestrians and bicyclists killed in traffic crashes every year. And yet we continue to subsidize the decision to drive a dangerous, spacehogging vehicle, alone, in central Manhattan – the most densely-populated, most transit-rich area in North America – by charging fares for those who enter on buses and trains, but not for those in cars. It’s long past time for New York to make congestion pricing the law of the land. The status quo is no longer an option. We can can’t afford to wait another year.”

Elizabeth Goldstein, President of the Municipal Art Society of New York, said: “The current state of the New York City subway system can be summed up in one word: crisis. New York’s 5.6 million daily riders deserve real solutions that address our immediate needs, as well as the challenges yet to be seen. The Fast Forward plan is both practical and visionary – all we need now is a funding mechanism to match. Congestion pricing is the first step.”

Theatre of the Oppressed NYC artists Letitia Bouie and Maria Walles said: “Millions of New Yorkers are impacted by unending subway delays and service failures, but particularly low income New Yorkers who have to travel between medical appointments, childcare, multiple jobs and other essential services each day. Our fellow artists face homelessness, parole and probation, and health crises. Our community loses out on income necessary to maintain our housing, and our health is decreasing, due to the state of the subway system.”

Jessica Murray, a volunteer with Rise and Resist said: “People with disabilities in New York City have never had fair and equitable access to the subway. We need the Fast Forward plan because it will finally fix the subway for everyone.”

Guy Geier, President American Institute Architects New York, said: “Proximity to the subway influences where architects build, since people want to work, live, and play in easily accessible places. Our broken subway system is an equity issue: we need to fix the subway so that more people have access to everything New York City has to offer. The Fast Forward Plan provides a realistic path to fixing the subway, and congestion pricing is one of the sources needed to ensure that the plan is fully funded.”