Citing enormous health and economic costs, State Senator Brad Hoylman (D-Manhattan), the American Lung Association, and Environmental Advocates NY today condemned efforts to further delay implementation of the Diesel Emission Reduction Act (DERA) within the SFY2016-17 Budget. DERA was enacted a decade ago with near-unanimous bipartisan support; full implementation was expected in 2010, but has been delayed annually by the Senate Majority.

DERA passed 10 years ago, but Republicans continue to block implementation of public health measure they championed

The law’s delay endangers the health of millions of New Yorkers with lung disease and 390,000 kids with asthma

NEW YORK – Citing enormous health and economic costs, State Senator Brad Hoylman (D-Manhattan), the American Lung Association, and Environmental Advocates NY today condemned efforts to further delay implementation of the Diesel Emission Reduction Act (DERA) within the SFY2016-17 Budget. DERA was enacted a decade ago with near-unanimous bipartisan support; full implementation was expected in 2010, but has been delayed annually by the Senate Majority.

More than 20 organizations have called for implementation this year.

Signed by former Governor George Pataki in 2006, DERA sought to reduce emissions of fine particulate matter – microscopic particles that can lodge themselves in the lungs and cause severe asthma attacks – by requiring the State and its contractors to operate a cleaner fleet of diesel trucks or replace old trucks with more efficient vehicles.

Despite growing data linking diesel to numerous negative health outcomes, the requirements of DERA have never gone into full effect because Senate Republicans have repeatedly proposed to delay implementation, and announced their intention to do so once again in their 2016-17 Budget Resolution. The budget proposals from Governor Cuomo and the Assembly Majority are both supportive of full enactment this year. 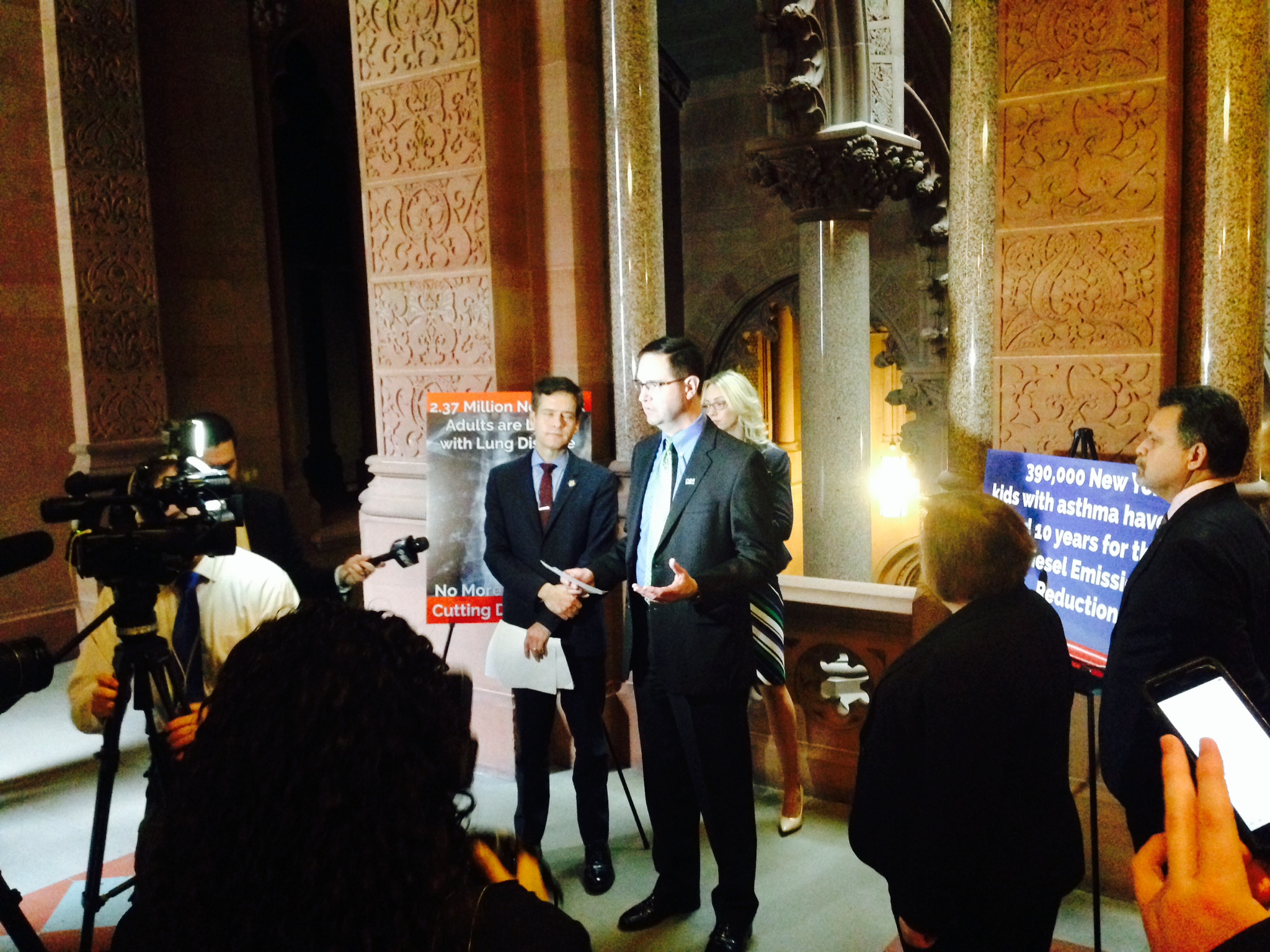 State Senator Brad Hoylman, Ranking Member of the Senate Environmental Conservation Committee, said: “The Diesel Emissions Reduction Act was passed ten years ago by the very legislative body and elected officials now seeking to dismantle it through endless delay. Each year we postpone DERA our state incurs more unnecessary costs, inflicts more damage to our environment, and loses more lives to wholly preventable causes.  It is time for the Senate to stop using the budget process to obstruct the course of progress and join both the Assembly and the Governor in allowing DERA to finally take effect.”

Peter Iwanowicz, executive director of Environmental Advocates NY, said: “DERA went from inception to passage in the state Senate in a matter of weeks. It was common-sense, and everyone agreed that it was a necessary step to take in order to protect public health and keep people from getting sick due to diesel pollution. Now, 10 years later, the very people who championed its passage are advocating an endless delay. This is about kids, healthy air, and doing what’s right. We urge the Senate Majority Coalition to reverse course, and for DERA to take full effect this year.”

Kristina Wieneke, public policy director of American Lung Association New York, said: “The fact is that a reduction in diesel emissions means healthier New Yorkers. That’s why this law was passed a decade ago, and we have waited far too long for it to be implemented. With more than 390,000 kids living with asthma, and 2.3 million adults living with lung disease right here in New York, it is time to get it done and not roll it back any further. We implore the State Senate, the State Assembly, and Governor, to join efforts to finally make this vital law a reality on the 10th anniversary of its passage.”

Diesel is the third largest human-contributor to the emission of fine particulate matter, which is responsible for up to 15,000 premature deaths nationwide each year. According to the U.S. Environmental Protection Agency (EPA), diesel fuels are directly linked to myriad health issues including lung cancer, heart arrhythmia, and asthma attacks. Currently, only about 80% of the State’s fleet is in compliance with DERA and the compliance rate is significantly for contractors. The Senate’s current delay proposal would exempt contractors entirely from the law.

According to the American Lung Association, over 390,000 children are suffering from asthma in New York, as well as 2.3 million adults with lung disease. These health issues are felt acutely in low-income and minority neighborhoods, and such ailments costing the state an estimated $1.3 billion each year “in direct medical costs and lost productivity,” according to the Office of the State Comptroller.

A county-by-county breakdown of cases of childhood asthma and adult lung disease can be found online.