Albany—At the first hearing on New York’s Draft State Energy Plan, dozens of organizations and scores of New Yorkers showed up to tell Governor Cuomo that he must set New York down the path to clean, renewable energy and away from dirty fossil fuels of the past. The Governor, who committed in this plan for the first time to reducing greenhouse gas emissions a full 80 percent by 2050, would break that pledge were he to allow fracking in New York State. Voicing concern about the plan’s ambiguity and continued reliance on fossil fuels, the advocates also called for clear aggressive steps to move New York away from dirty energy, to dramatically scale up energy derived from renewable resources and to start now to reduce all the pollutants that are worsening climate change. 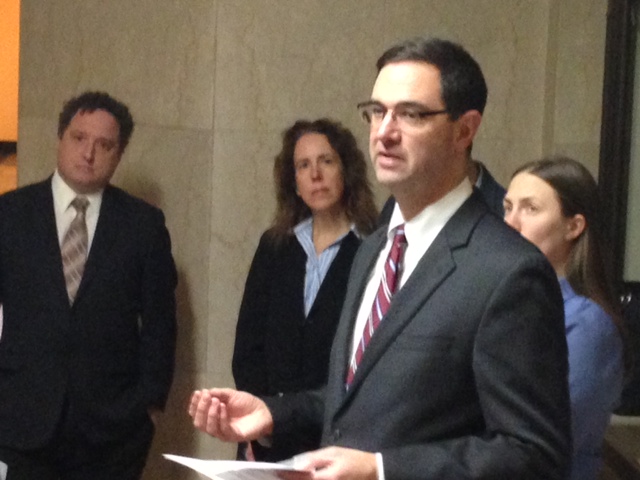 “New York has a goal of reducing climate change pollution but we don’t have a clear plan on how to get there,” said Peter M. Iwanowicz, executive director of Environmental Advocates NY. “It is time for Governor Cuomo to take the bold step to pull the state out of the dirty ways of the past and to move us forward with energy sources that are clean, healthy and beneficial for all New Yorkers.”

The New York State Energy Plan is a comprehensive, economy-wide multi-year plan presented by the State Energy Planning Board, which presents the Governor’s vision on how the state will produce, transport and consume energy over the long-term. The Board, guaranteed in statute, is comprised predominantly of gubernatorial appointees, with appointees also named by the Senate and Assembly. The Board is conducting six public hearings on their Draft Plan in the coming weeks, with an April 30th public comment deadline.

In addition to affirming Governor Cuomo’s commitment to an 80 percent reduction in greenhouse gas emissions from 1990 levels by 2050, the plan also sets an interim goal of 50 percent reduction by 2030. But this step only applies to carbon dioxide whereas the 2050 goal properly applies to all greenhouse gas pollutants. It is imperative that New York State immediately target all greenhouse gases, particularly given that some, like methane, which is released by natural gas, are especially potent in the atmosphere in the short term. According to the latest Intergovernmental Panel on Climate Change, methane is 86 times more potent than carbon dioxide over a 20-year time frame and 34 times more so over a 100-year time frame.

The draft energy plan contains provisions that encourage the acceleration and expansion of natural gas, a move in the wrong direction, and in one section insinuates that fracking may be permitted in New York State.

Julia Walsh of Frack Action and New Yorkers Against Fracking said, “To keep his promise on climate change and to meet the energy plan’s goals, Governor Cuomo has to ban fracking. Further, he should halt investment in new natural gas and infrastructure, and instead be a national leader by transitioning swiftly and boldly to renewable energy.”

The state’s Energy Plan needs to lay out greater increases in renewable energy, which would make the Governor’s ambitious goals more achievable and create many more manufacturing and construction jobs. The plan forecasts virtually no growth in renewable energy use during 2020-2030, despite significant technical advances continually being made in renewable technologies. Additionally, the use of renewable energy (wind and solar) has more than doubled in New York between 1990 and 2012, far exceeding the growth rate of every fossil fuel source (including natural gas). The plan and New York State as a whole would benefit from much more aggressive renewable energy targets, as well as from expanding New York’s commitment to energy efficiency in all sectors of the economy.

New York can no longer pursue an “all of the above” energy strategy. Natural gas, coal and oil must be phased out quickly to meet our climate goals. Nor can the state continue to rely on its antiquated and dangerous fleet of commercial nuclear reactors; as these go off-line, they should be replaced with clean renewable energy and energy efficiency.

“Rather than creating a self-fulfilling prophecy that squashes the emergence of renewables with fracked gas, New York State needs to take a proactive stance and go all-in on renewable energy,” said Keith Schue, an engineer from Cherry Valley. “The outstanding performance of wind and solar in recent years proves that renewables have come of age. It’s time to embrace them and enter the 21st century.”

Laura Haight of the New York Public Interest Research Group said, “New Yorkers know firsthand the devastating impacts of climate change. In order to meet our climate protection goals, we need to move away from dirty fossil fuels and risky nuclear power; maximize energy efficiency; and transition our energy system to clean renewable energy. Unfortunately, this plan commits New York to a course of further reliance on fracked gas, putting our health and our environment at risk and leaving consumers vulnerable to drastic price increases in the future.”

Roger Downs, conservation director for the Sierra Club Atlantic Chapter said, “Governor Cuomo’s stated goal of an 80% reduction in greenhouse gases by 2050 is laudable but completely unachievable if we follow the Energy Plan’s prescription for increased natural gas infrastructure and consumption. We cannot frack and burn our way to a stable global climate, especially when underutilized alternatives like distributed solar and off shore wind present real solutions to protecting our communities and revitalizing New York’s economy.”

The groups called for greater details as to exactly how the state will meet the goals set out in the energy plan; the current draft is far too vague on the specifics.

The Draft Plan is available on-line at energyplan.ny.gov.