New Senate Majority Leader John Flanagan (R-Long Island) has the opportunity to break from the contributor-driven style of leadership of his predecessor and begin to rebuild the public’s faith by allowing a simple up or down vote on several key health and safety bills sponsored by more senators than votes needed for passage.

Albany – New Senate Majority Leader John Flanagan (R-Long Island) has the opportunity to break from the contributor-driven style of leadership of his predecessor and begin to rebuild the public’s faith by allowing a simple up or down vote on several key health and safety bills sponsored by more senators than votes needed for passage.

Today, several good government, public interest and environmental organizations outlined the details of five pieces of legislation currently stalled in the state Senate that are sponsored by more than 32 members of the Senate; it takes 32 votes to pass a bill. SEE VIDEO HERE.

The groups challenged Senator Flanagan to commit to allowing basic up or down votes on these broadly supported bills before the end of this legislative session.

“All we are asking of Senator Flanagan is that he walk the talk,” said Peter Iwanowicz, executive director of Environmental Advocates NY. “Senator Flanagan knows the public’s confidence has been shaken to the core by legislators and legislative leaders who are making policy decisions based on whether their family or campaign contributors profit. These five bills are supported by Republicans and Democrats, from Upstate and Downstate. They will pass or fail on their merits, and all we ask is that he let that happen. Senator Flanagan does not want his tenure to be a continuation of the Skelos agenda. This is his way to prove it won’t be.” 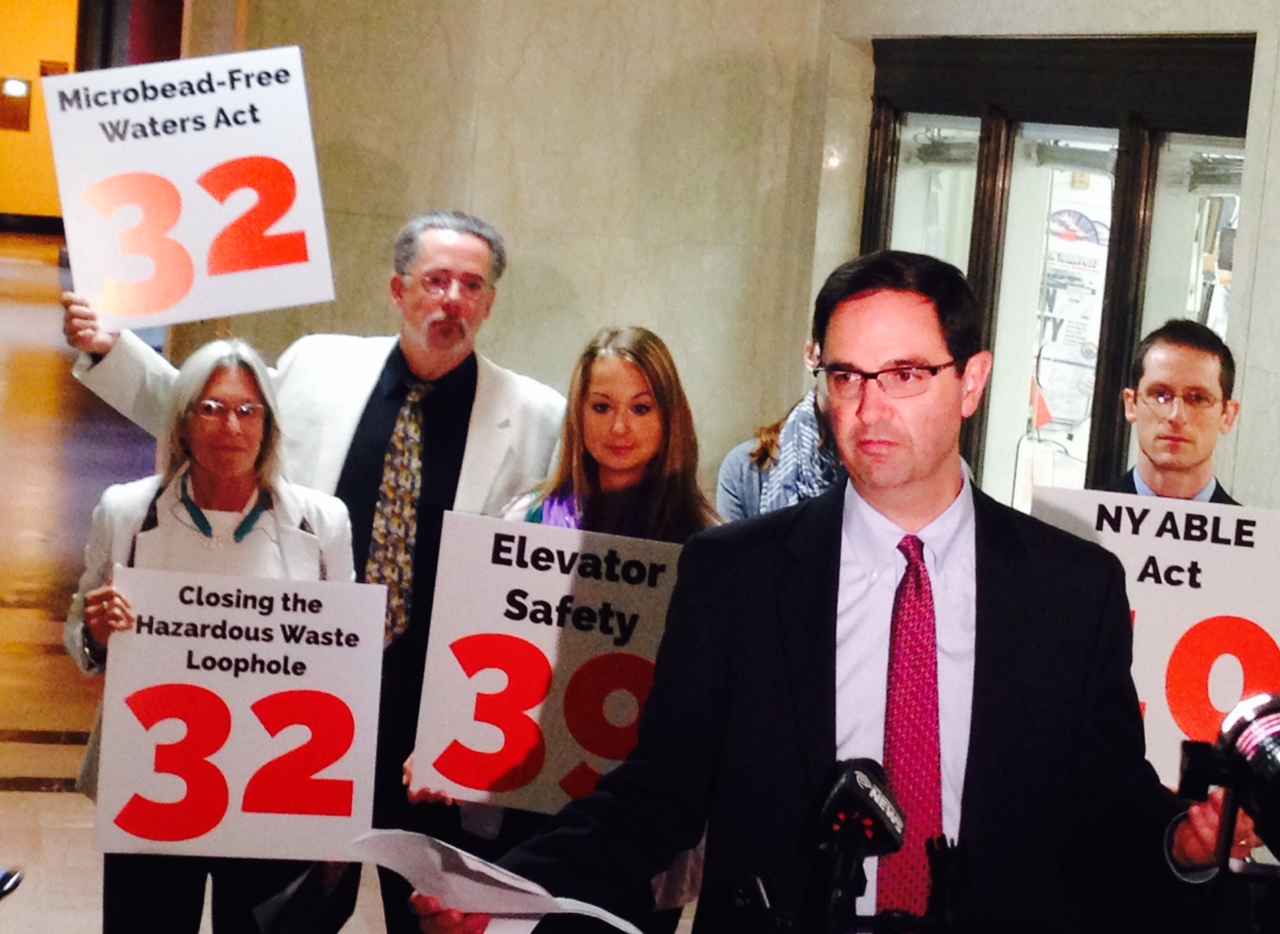 Dick Amper, executive director of Long Island Pine Barrens said, “Long Island is reeling from the corruption in the state Senate, and the only person who can begin to rebuild the public’s trust is Senator John Flanagan. Under Dean Skelos, the Senate became a place where legislation either passed or died based on who would profit. That hurt Long Island and all of New York. Senator Flanagan has used many catchphrases like ‘the people’s business,’ ‘protecting families’ and ‘one New York’ since his selection as leader. He can prove that he means what he says, and that the Senate will not be more of the Skelos years, by allowing bills sponsored by a majority of his colleagues to receive a fair vote.”

“All too often, our state Senate is where good bills go to die,” said Karen Scharff, executive director of Citizen Action of New York. “Senator Flanagan should take this chance to show that the Senate can be responsive to needs of voters instead of the greed of CEO campaign contributors.”

“There is no excuse for preventing bills, like the ones identified today, which have a majority of members as co-sponsors from receiving a vote,” said Susan Lerner, executive director of Common Cause/NY. “New Yorkers need to be shown that the new leadership is responsible and responsive to the people’s concerns. Moving bills which have broad-based support is a common sense way to do that. Best practice demands that Senator Flanagan do away with unnecessary roadblocks that bottle up bills and facilitate procedures that foster open debate and allow up or down floor votes.”

“This is a moment for Senator Flanagan to demonstrate that the Senate will do the people’s business,” said Kathy Curtis, executive director of Clean and Healthy New York. “When bills like the Child Safe Products Act have achieved critical mass – with support of legislators representing the majority of New Yorkers from across the state – they deserve a vote by the full Senate. We urge Senator Flanagan to seize this opportunity to demonstrate his willingness to lead with openness and transparency, and bring these bills to the floor.”

Caitlin Pixley, conservation program associate of the Sierra Club Atlantic Chapter said, “Three of the five bills currently sponsored by more than 32 senators concern New York’s public health and environment, making it clear that these issues are important to Senator Flanagan’s colleagues and all New Yorkers. We are confident these bills will pass and help to preserve New York’s air, water and natural resources.”

“While microbeads are small, the problem they are creating is very large,” said William Cooke, director of government relations for Citizens Campaign for the Environment. “The solution is unbelievably simple and absolutely free. The answer is to take them out of our products now. This legislation currently has more support than is needed to pass. The only question is will the new Senate Majority Leader John Flanagan allow it to move forward.”

Legislation Sponsored by More Senators than Votes Needed for Passage

40 SPONSORS/Child Safe Products Act (S4102): the toy industry has spent hundreds of thousands of dollars to block this common-sense bill which will regulate toxic chemicals in children’s products. The bill is sponsored by Republican Phil Boyle (R-Bay Shore), co-sponsored by an additional 12 members of the Majority, and all five members of the Independent Democratic Conference (IDC). The Assembly version passed overwhelming with Republican support in April. The bill also had more than 32 Senate sponsors in 2013 and 2014.

32 SPONSORS/Closure of the Hazardous Waste Loophole (S884): the U.S. Attorney’s complaint against Senator Skelos alleges conversations on how to benefit financially from fracking waste happened at the same time that legislation sponsored by more than 32 Senators to classify crude and natural gas drilling waste as hazardous died in the Senate. This bill will eliminate the existing hazardous waste loophole within state law and regulations (which will not be covered by Governor Cuomo’s impending ban) to ensure proper oversight of other states’ fracking waste inside our borders.

34 SPONSORS/Microbead-Free Waters Act (S3932): sponsored by Republican Environmental Conservation Committee Chair Tom O’Mara, this legislation is also co-sponsored by an additional nine Republicans and three IDC members. This bill will prohibit the distribution and sale of personal care products made with unnecessary tiny plastic pellets, which are hurting our waterways and wildlife because New York’s wastewater treatment plants are not equipped to filter them prior to their release into the environment.

41 SPONSORS/Elevator Safety (S1945): idle since 2012, this legislation would require the licensing of persons engaged in design, construction, operation, inspection and maintenance of elevators.

40 SPONSORS/NY ABLE Act (S4472A): this legislation would assist individuals in saving private funds to support individuals with disabilities to allow them to maintain health, independence, and quality of life.