New Yorkers came to Albany from across the state to pay tribute to one of New York’s greatest environmental champions – Pete Seeger – followed by lobbying their elected officials to pass critical legislation to protect our communities from clear and present threats to human health, the environment and our economy. 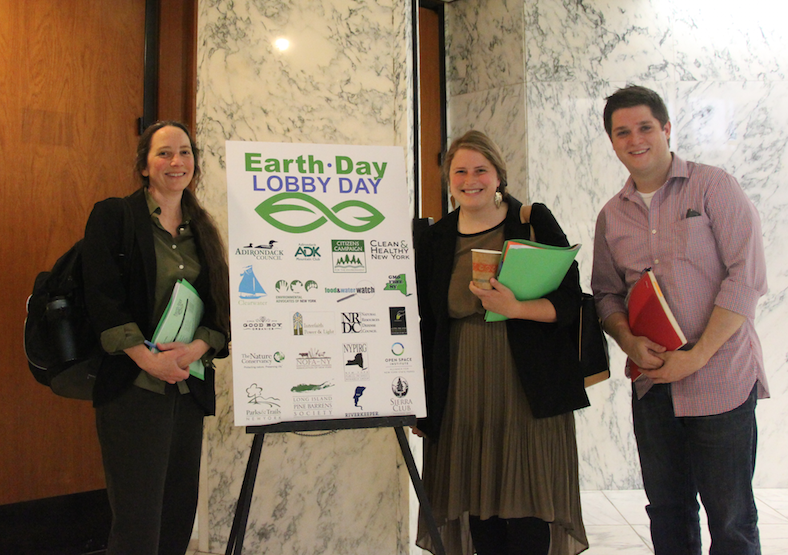 Albany – New Yorkers came to Albany from across the state to pay tribute to one of New York’s greatest environmental champions – Pete Seeger – followed by lobbying their elected officials to pass critical legislation to protect our communities from clear and present threats to human health, the environment and our economy.

Earth Day Lobby Day, now in its 24th year, is centered on a common-sense legislative agenda championed by the state’s environmental and public interest groups including:

Neil F. Woodworth, Executive Director of the Adirondack Mountain Club said, “The environment and ecosystems of the Adirondack Park could be greatly harmed and altered by climate change, our staff and members will get the chance to lobby for legislation that will reduce New York’s contribution to heat trapping gases and promote renewable energy sources.”

Peter Iwanowicz, Executive Director of Environmental Advocates NY, said “Too often public health and environmental protections are trumped by deep-pocketed industry lobbyists. Earth Day Lobby Day provides an opportunity for political leaders to engage with the thriving network of grassroots activists who come to Albany to encourage the legislature to acknowledge the risks and dangers of climate change and to take the necessary measures to protect New Yorkers”.

Laura Haight, Senior Environmental Associate with NYPIRG said, “For 24 years, Earth Day Lobby Day has been the centerpiece of the environmental community’s grassroots lobbying efforts in Albany. While other lobby days focus on specific issues, like fracking or environmental funding, this annual event brings concerned citizens and environmentalists together around a broad platform of issues affecting New York’s air, land, water and public health. In honoring Pete Seeger this year, we are honoring a tradition of citizen engagement and advocacy in working to solve these problems.”

Roger Downs, Conservation Director of Sierra Club Atlantic Chapter said, “Pete Seeger long urged his audiences to ‘learn to talk to people you disagree with’ and earth day lobby day puts that advice to work every year. But with a legislature increasingly awash in industry money that job gets more difficult on issues like fracking or climate change where campaign contributions speak louder than the policy needs of the planet. We especially hope that lawmakers focus on the right kind of ‘green’ this year.”

Kathy Curtis, Executive Director of Clean and Healthy New York, said “Our elected officials seldom hear from their constituents, so it’s noteworthy when they do. Without the type of robust public participation Earth Day Lobby Day offers, legislators risk occupying an echo chamber in which they’re increasingly out of touch with the very people they represent. It’s essential that people exercise their considerable power to advance policy by directly voicing their concerns about public health and the environment. Otherwise, they stand to lose that power.”

This legislation will stop the Department of Environmental Conservation from issuing any permits to drill for natural gas in the Marcellus and Utica shale formations using high volume horizontal “fracking” methods for one year. In that time, a school of public health within the SUNY system must conduct a comprehensive health impact assessment and public review process to determine the repercussions of fracking on public health.

Children’s products routinely contain chemicals linked to health and developmental products, and parents lack basic information to protect their families. The Child Safe Products Act is a systemic approach to this problem. It identifies chemicals of high concern (based on toxicity), and deems a subset of these ‘priority chemicals.’ Children’s product makers will have to disclose which products contain priority chemicals, and phase the chemicals out of such items in New York by 2018.

The Climate Protection Act establishes a timetable for reducing greenhouse gas emissions in New York by 80% below 1990 levels by 2050, as recommended by international climate experts. The bill caps climate change pollution from all measurable sources in NY starting in 2016 and then incrementally lowers that cap, starting with a 20% reduction by the year 2020, with additional 10% reductions every five years. The bill also requires the state to develop a plan to adapt to the environmental threats posed by our changing climate.

To help New York better adapt to a changing climate, sea level rise projections and climate data should be integrated into state planning and permitting programs. The Community Risk Reduction Act will make such evaluation a required element for all state-permitted and funded development, not just rebuilding efforts after a catastrophic storm. This legislation applies such standards to projects proposed through a variety of state funding and permitting programs.

This legislation mandates that any food offered for retail sale in New York must be labeled if it is wholly or partially composed of genetically-modified organisms (GMOs). Serious concerns have been raised about the environmental impacts of growing GMO crops, including increased pesticide use and cross-pollination with conventional crops and wild plants. The GMO Labeling Act gives consumers the right-to-know what’s in their food and how it was produced.

New York’s toxic waste clean-up programs are in peril. The State Superfund, which addresses the most heavily-contaminated sites, has only two years of operating funds remaining, and the Brownfield Cleanup Program (BCP) tax credits will expire at the end of 2015. The Environmental Restoration Program and the Brownfield Opportunity Areas (BOA) program are also in jeopardy. It is imperative that state lawmakers make a long-term commitment to these programs so cleanups don’t grind to a halt. In addition, significant reforms are needed to make the BCP more effective and ensure that tax credits are targeted to sites that otherwise would not be cleaned up and revitalized.