This Wednesday, the state’s Public Authorities Control Board is expected to vote on Governor Andrew Cuomo’s $511 million clean water raid and the Administration has blocked all attempts to access basic financial information regarding their plan, as well as how they intend to pay for construction of a new Tappan Zee bridge.

Albany—This Wednesday, the state’s Public Authorities Control Board is expected to vote on Governor Andrew Cuomo’s $511 million clean water raid and the Administration has blocked all attempts to access basic financial information regarding their plan, as well as how they intend to pay for construction of a new Tappan Zee bridge.

Environmental, public interest and transportation advocates have called for the release all of this critical information, which has been sought by public officials, advocates, editorial boards and the federal government.

To date, the Cuomo Administration has: 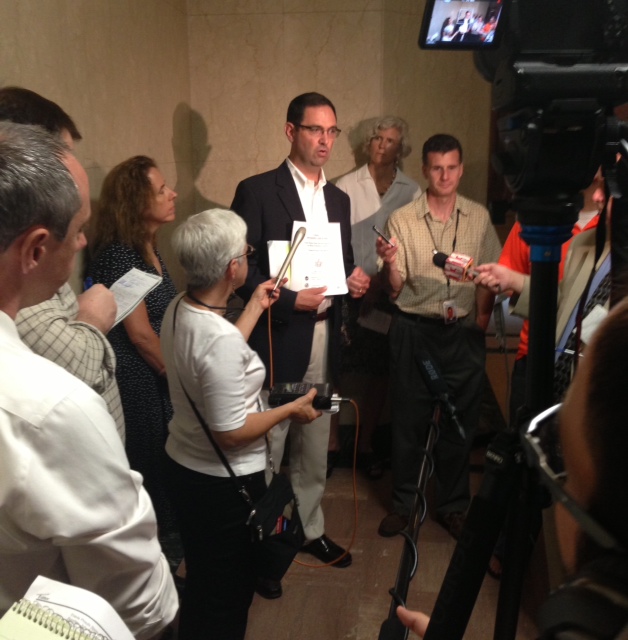 Peter Iwanowicz, executive director of Environmental Advocates NY said, “The secrecy has gone on long enough, Governor Cuomo should immediately tell the public how he plans to pay for this bridge, and prove that his administration followed state law by producing the formal application and all relevant financial data concerning his clean water raid. No oversight entity – including the federal government or PACB – can properly assess the impacts this raid will have on taxpayers, communities, our health or environment if Governor Cuomo insists on keeping basic information from the public.”

Marcia Bystryn, president of the New York League of Conservation Voters said, “Clean-water funds have never been used for a transportation project before – and we shouldn’t start now. If approved, this would set a very bad precedent, especially considering the huge backlog of wastewater projects across the state.”

Laura Haight, senior environmental associate at NYPIRG said, “With the extreme lack of transparency and the serious concerns raised by the U.S.  Environmental Protection Agency, it would be irresponsible for the Public Authorities Control Board to move forward on the Tappan Zee Bridge loan when they meet on Wednesday. We’re calling on Assembly Speaker Sheldon Silver and Senator DeFrancisco to put a halt to this process until all of these questions have been answered.”

Paul Gallay, president and Hudson Riverkeeper said, “So far, the plan to raid clean water funds to finance the new Tappan Zee Bridge has simply been rubber-stamped by the Governor’s own hand-picked team. Since then, the editors of six major newspapers and over a dozen good government groups have shown how deeply flawed this plan is.  Now that the plan is being voted on by the Public Authorities Control Board, where state legislators have veto power, we’ll see whether anyone in Albany is independent enough to say: ‘the emperor has no clothes.’”

Veronica Vanterpool, executive director of the Tri-state Transportation Campaign said, “Nearly three years after the new bridge project was announced, there remain too many unanswered financial questions. The public has a right to know how the TIFIA and CWSRF loans will be repaid and what the toll structure will be. The New New York Bridge is one of the most significant infrastructure projects in the country and shouldn’t be mired in opaque financial disclosure.”