The following op-ed was published in the Times Union on October 6, 2022 and was written by Peter Iwanowicz, Executive Director of Environmental Advocates NY.

In 1962, President John F. Kennedy said, “we choose to go to the moon in this decade.” In 1969, Apollo 11 touched down in the Sea of Tranquility. A little over 30 years before that, the Empire State Building was built and was the tallest building in the world for over 40 years. In 1825, the Erie Canal was completed. Throughout our history, we have done big and great things.

It’s in that same spirit that in 2019, New York enacted one of the world’s most ambitious approaches for tackling climate change. It requires aggressive pollution cuts and commits New York to a just and equitable transition into a 100 percent renewable-energy economy. These goals are big, their impact great.

Now, as part of any process like this, you expect to hear from the normal crew of industry lobbyists and special interests. So, it’s no surprise that oil and gas companies (who stand to lose tens of billions annually as we move away from their products) are leading the fight to maintain the status quo. They are assembling a collection of co-conspirators to parrot their message.

This “can’t do chorus” launched an effort this spring to convince anyone who will listen that we aren’t ready for a transition off fossil fuels, that the technology isn’t there, that companies will flee the state, that jobs will be killed, and that the lights will go off. It’s the same old, tired song we hear every time plans to protect and preserve our health and environment put their profits at risk. As a government official, I was told much the same in 2009 when New York and other states launched the first carbon pollution allowance auctions, making polluters pay a fee for their air emissions. 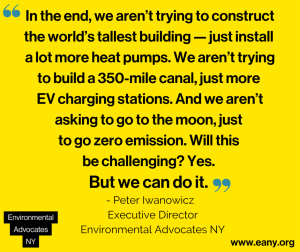 Predictably, this cynical attitude doesn’t square with the facts or with what is going on today across the state, country, or world. Solar panels grace large arrays and rooftops; wind turbines dot land- and waterscapes. These help power batteries, electric vehicles, and heat pumps that are becoming all the more common. Clean-energy technologies are here, now, and working. It really is a matter of scaling it all up so that everyone can share equitably in the all-electric future.

For the “can’t do chorus” to succeed, it hopes that you will ignore the huge health benefits that we will all enjoy as we move away from their product. Burning oil and gas causes nearly all of our air pollution problems, which, in turn, make us sick.

We all know that burning things (either in a car engine or in a furnace) releases carbon dioxide, which is driving climate change. But it also flings other pollutants into the air that contribute to asthma, respiratory, and cardiovascular disease. Eliminating these co-pollutants by moving to clean energy will mean significant savings in terms of medical costs (less spent on medicines and doctor office co-pays because we are all healthier), not to mention the reduction in premature deaths.

The final refrain of the “can’t do chorus” is to deny that a transition off fossil fuels makes the most economic sense. In fact, a study by New York state found that the economic benefits of implementing the climate law far outweigh the economic costs of inaction by between $90 and $120 billion. What that means for New York households is more predictable energy bills and healthier communities for less than it would cost under the “can’t do chorus” plan.

In the end, we aren’t trying to construct the world’s tallest building—just install a lot more heat pumps. We aren’t trying to build a 350-mile canal, just more EV charging stations. And we aren’t asking to go to the moon, just to go zero emission. Will this be challenging? Yes. But we can do it. While some lack faith in the ingenuity and determination of New Yorkers and our skilled workforce to tackle the climate crisis, I don’t. And when the “can do” spirit finally triumphs, we all will be better off – and healthier – for it.

Peter Iwanowicz of Bethlehem is a member of the Climate Action Council and executive director of Environmental Advocates NY.