Albany – Today, a coalition of labor, local government, and environmental organizations sent a letter to Governor Andrew Cuomo calling on him to increase funding for the Lead Service Line Replacement Program (LSRP) to $100 million.

Albany – Today, a coalition of labor, local government, and environmental organizations sent a letter to Governor Andrew Cuomo calling on him to increase funding for the Lead Service Line Replacement Program (LSLRP) to $100 million. The program helps municipalities replace aging water pipes that can leach toxic levels of lead into drinking water and is funded through the Clean Water Infrastructure Act. Since 2017, the program has allocated $20 million to 25 municipalities across the state.

Lead service lines, which connect the water mains beneath city streets to the internal plumbing in residential buildings, are considered the greatest contributor to lead in drinking water. Through the grants provided by the Lead Service Line Replacement Program, the entire lead service line is dug out of the ground and a safer pipe material is used as a replacement. New York has one of the oldest housing stocks in the nation, and it is known that homes built before 1986 have a higher chance of having lead service lines. 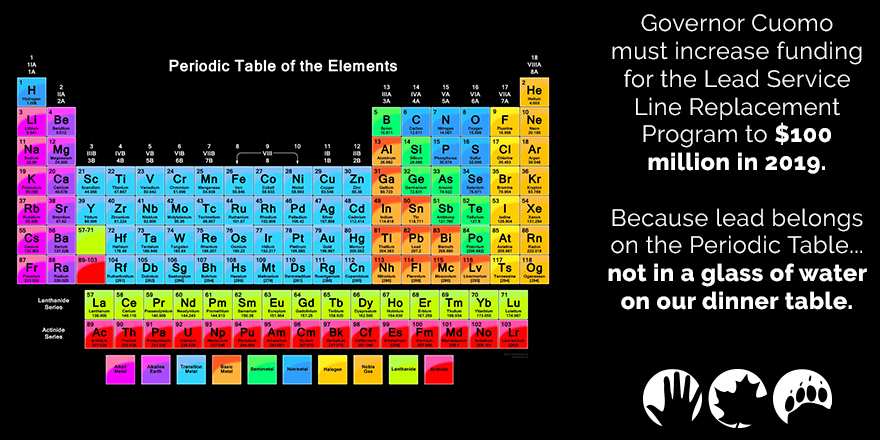 “While the initial investment in the LSLRP has been a positive first step, with an estimated 360,000 lead service lines across New York in need of replacement, the program must be scaled up to meet the needs of New York municipalities. Given that the total cost of replacing New York’s known lead services lines reaches at least $1 billion, a $100 million investment would substantially reduce the number of lead service lines in our state.”

Rob Hayes, clean water associate for Environmental Advocates NY said, “There is no safe level of lead in drinking water… any amount of exposure is a threat to human health. Municipalities are doing all they can to keep lead out of their water, but as long as there are lead pipes beneath our feet, contamination is a constant threat. The safest solution is to increase funding so communities can proactively eliminate these dangerous pipes rather than reacting once the system fails.”

Nisha Swinton, northeast senior organizer for Food and Water Watch said, “Lead contamination is a public health crisis, and the Cuomo administration must treat it like one by providing the funding necessary to protect access to clean, safe drinking water for all New Yorkers.”

Claire Barnett, executive director of Healthy Schools Network, said, “New York understands the dangers of lead contamination, especially for young children. We support an increased investment in eliminating lead service lines for the same reasons we are working to remove lead from school drinking water. Exposure to lead is bad for all of us, but its impact on kids can be devastating. Increasing New York’s investment in eliminating lead service lines is an important part of a statewide strategy to end childhood lead exposures which has the added benefit of reducing costs related to health care and special education.”

Frank Natalie, business agent for UA Plumbers Local 7, said, “Science has established that there is no acceptable safe level of lead in humans; therefore, these lines must be excavated and replaced immediately. Every time someone turns on the tap, they may be putting themselves or their loved ones at risk of lead poisoning. Replacing all of the lead service lines in New York requires funding and craft expertise. The UA Plumbers stand with the Environmental Advocates NY and the coalition in asking Governor Cuomo to increase funding in the upcoming budget to do this work.”

Infants are especially at risk from lead in drinking water. According to the EPA, up to 60 percent of their lead exposure can come from the water mixed with their formula.

In September, the New York City Independent Budget Office released a report on lead in drinking water in the city. Even with the city applying corrosion control treatment to its water, neighborhoods in the Bronx, Queens, Brooklyn, and Staten Island were still finding up to 8 percent of water samples testing for levels of lead above the EPA action level of 15 ppb.