New EPA health advisories confirm that no level of PFOA, PFOS is safe

Albany, NY – Today, advocates urged Governor Hochul and the NYS Department of Health (DOH) to bring New York’s drinking water standards on toxic PFAS in line with new EPA health advisories. They called for current standards on two PFAS chemicals, PFOA and PFOS, and proposed standards on 23 additional PFAS to be lowered to as close to zero as possible. This would ensure that New Yorkers would be directly notified about what’s in their water, and that dangerous contamination would be eliminated.

New York’s Maximum Contaminant Levels (MCLs) for PFOA and PFOS currently allow up to 10 parts per trillion (ppt) of each of these chemicals in drinking water. Those levels are 10 times higher than what EPA now says is safe.

Recently, the NYS Drinking Water Quality Council (DWQC) proposed new MCLs for 4 additional PFAS, also at 10 ppt each. In addition, the DWQC proposed Notification Levels (NLs) for 6 other PFAS at a combined 30 ppt and for 13 other PFAS at a combined 100 ppt. Advocates argue these proposals are too high to adequately protect public health given the similarities between those chemicals and PFOA and PFOS. MCLs require public notification and drinking water cleanup if exceeded; NLs only require public notification if exceeded.

According to a review of a selection of statewide testing data, at least hundreds of thousands of New Yorkers have PFOA, PFOS, and/or other PFAS in their water, but at levels below the current or proposed standards. The list of approximately 20 identified water utilities can be found on pages 3-5 of a letter recently sent to the Governor and DOH by a broad coalition of close to 40 organizations. These utilities have not been and likely would not be required to clean up their water, leaving New Yorkers at increased risk of developing serious illnesses like kidney and testicular cancer, thyroid disease, and more when they turn on the tap. 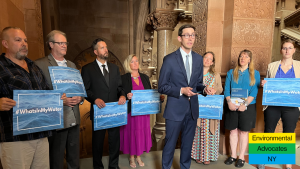 Rob Hayes, Director of Clean Water with Environmental Advocates NY, said, “Ossining, Peekskill, Rotterdam: these are just a few of the communities legally exposed to dangerous levels of PFAS chemicals. Governor Hochul and DOH must act swiftly to ensure these communities have clean, safe water. They can strengthen New York’s PFAS drinking water standards and guarantee that toxic contamination is cleaned up. New Yorkers cannot afford to have new PFAS protections delayed any longer.”

“The EPA made clear that there is no safe level of exposure to dangerous PFAS chemicals in drinking water,” said Brian Smith, Associate Executive Director for Citizens Campaign for the Environment (CCE). “New York led the nation when they adopted standards for PFOA and PFOS in drinking water, however, new science reveals that our current standards are inadequate to protect public health. As science-based information changes, our policies must change as well. Now we need New York to once again step up and lead the nation in protecting public health and environmental resources. New Yorkers need and deserve clean drinking water that’s why we are urging the Department of Health and Governor Hochul to move swiftly and adopt drinking water standards for PFAS chemicals as close to zero as possible.”

Dr. Linda Birnbaum, Scientist Emeritus and Former Director of the National Institute of Environmental Health Sciences and National Toxicology Program, and Scholar in Residence at Duke University, said, “As a former federal toxicologist, I know how important EPA’s new health advisories for PFOA and PFOS are. It is clear there is no safe level of exposure to these dangerous chemicals. New York led the nation in beginning to get PFAS out of our water – now state leaders must take the next step. I urge Governor Hochul and NYSDOH to lower the current drinking water standards for PFOA and PFOS to as close to zero as possible, and to regulate as many PFAS as possible under a combined standard and at the lowest level.”

Dr. Leonardo Trasande, who directs the NYU Center for the Investigation of Environmental Hazards, said, “Our research has demonstrated the enormous health and economic costs of not getting PFAS out of drinking water. Now that EPA has released their new PFAS health advisories, it’s time for New York to act. I urge the Governor and DOH to lower New York’s current PFOA and PFOS drinking water standards and set the most health-protective standards for other PFAS.”

Dr. David Carpenter, Director of the Institute for Health and the Environment at the University at Albany, said,“PFAS pose one of the greatest threats to public health today. As science about the dangers of these toxic chemicals advances, so must New York’s policies to protect drinking water and human health. EPA’s new health advisories make clear that we need to get PFOA, PFOS, and other PFAS completely out of our water. I urge Governor Hochul and DOH to strengthen New York’s drinking water standards on PFAS so every New Yorker has clean, safe drinking water.”

Tistrya Houghtling, Town Supervisor of New Lebanon, said, “In New Lebanon we have an old landfill whose monitoring wells tested positive for PFAS chemicals. At this time testing shows that it has not spread to other locations, however, we hope the state will find the funding to close our landfill ASAP to protect the health of all of our residents from these damaging chemicals. In addition, our high school has exceeded the state drinking water standard for PFOS. I would like to urge New York State to notify the public anytime there is a positive PFAS chemical level in any location, enact the most health-protective standards to clean up dangerous contamination, and provide funding to help local governments implement these new protections. It is important to have an open and transparent government and to notify the public anytime these harmful chemicals appear at any level – the state should never withhold information from them.”

“With the recent releases of research from the EPA and the NASEM report on PFAS physician guidance, of which I was selected as a community liaison, there is no doubt that exposure to a variety of PFAS may cause adverse health effects at extremely low levels,” said Loreen Hackett, Founder of PfoaProject NY and Hoosick Falls resident. “As such, there should be no doubt that the Water Quality Council set the lowest possible detectable limits for the PFAS being proposed for MCLs and notifications, if they truly want to follow the science, and more so, protect our families from these bioaccumulating toxins.”

Frank Natalie, Town of Rotterdam resident, said, “As a resident, it is concerning to learn that the Town of Rotterdam’s most recent Water Quality Report shows levels of PFOA and PFOS in each of its wells far above EPA’s new science-based Health Advisory Levels (HALs). Moreover, EPA confirms there are no safe levels of PFAS, period. Governor Hochul and DOH must bring New York’s outdated standards for these dangerous manufactured chemicals in compliance with the science if we are to begin protecting New Yorkers from these highly toxic chemicals in our potable water sources.”

“There is nothing more important than the health and welfare of our children and families,” offered Kyle Belokopitsky, NYS Parent Teacher Association Executive Director. “We know that there is no safe or acceptable level of toxic PFAS in our drinking water, and we continue to seek DOH’s support for the lowest possible allowance.  We must do all we can to protect our children.”

“It seems like every week we are learning of a new way in which PFAS chemicals are making their way into our communities and homes. As we work to tackle the issue of turning off the tap on the use of these toxic forever chemicals in our everyday products, we must also work to strengthen New York’s PFAS drinking water standards,” said Caitlin Ferrante, Conservation Program Manager, Sierra Club Atlantic Chapter. “With the news from the federal Environmental Protection Agency confirming that there is no safe level of exposure to PFOA and PFOS, it is critical that the state take action. We call on Governor Hochul and the Dept of Health to protect our communities here in NYS by strengthening New York’s PFAS drinking water standards and doing so immediately.”

“It has sadly become the status quo for government inaction on toxic chemicals until far too many people get sick,” said Liz Moran, New York Policy Advocate for Earthjustice. “This is a pattern that must end. EPA has confirmed what science has been pointing to for years on PFAS – there’s no safe level of exposure. We are proud to join our partners to urge Governor Hochul and the Department of Health to listen to the science and establish MCLs for PFAS as close to zero as possible so more people don’t get sick from PFAS in their drinking water.”

“We urge the Department of Health to heed the call from EPA and scores of environmental and community groups, doctors and scientists, to establish drinking water standards as close to zero as is technologically feasible”, said Anne Rabe, NYPIRG Environmental Policy Director. “And to require notification to residents as soon as any level of PFAS is found in their drinking water supply as people have a right to know.”

“It’s urgent that the Department of Health and Governor Hochul act swiftly to set low cumulative thresholds for PFAS chemicals – as close to zero as possible. It’s also critical to recognize that the entire class of PFAS chemicals -over 9,000 individual structures- have been indicted for their harm on human health. We can’t wait to address these one, two, or even ten at a time. An overall, low threshold must be set,” said Bobbi Wilding, Executive Director of Clean+Healthy.