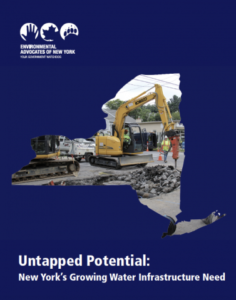 “We all deserve clean water. Unfortunately, New Yorkers access to clean water is at risk from crumbling drinking and wastewater infrastructure, said Maureen Cunningham, senior director for clean water for Environmental Advocates of New York. “New York needs to recognize the severity of the problem and invest at least $1 billion in new water infrastructure funding in this year’s state budget.”

The report found that more than $773 million was distributed to nearly 500 projects in 57 out of 62 counties between 2015 and 2018. But despite this, roughly half of shovel-ready projects went un-awarded in 2018, due to a lack of available funding.

“New York has some of the oldest water infrastructure in the country, which will cost at least $80 billion to fix,” Cunningham said. “Add to that the approaching threats of emerging contaminants and lead service lines that will only add to costs, and it is clear that New York State has barely scratched the surface of what is needed to fix our pipes.”

Even more detailed information about which local governments have received funding in each county can be found in EANY’s county factsheets.

Below is a list of the 57 counties that were awarded WIIA grants between 2015 and 2018, as well as grant dollars that were requested by shovel-ready but un-awarded applications in 2018.