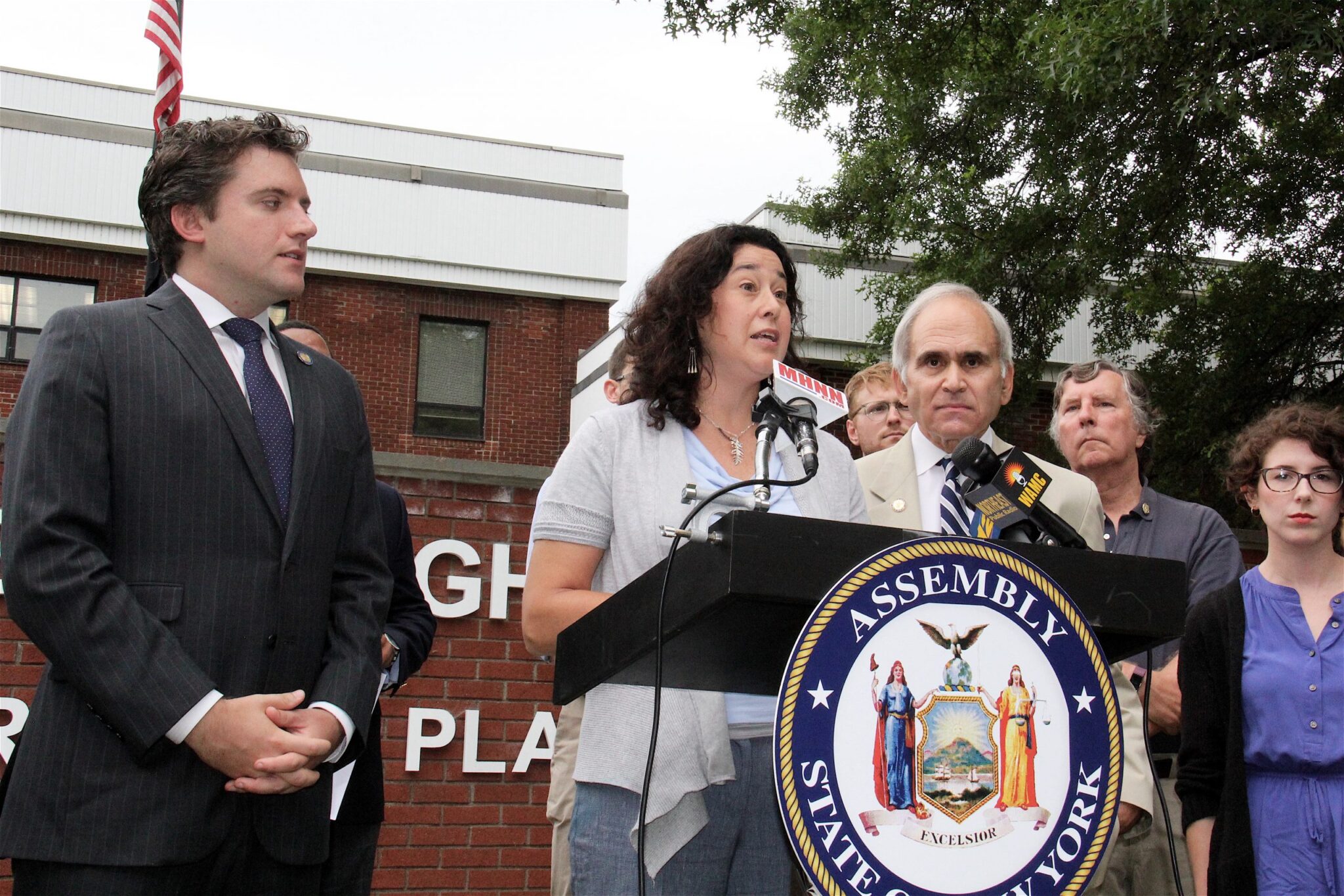 Senator James Skoufis said, “I was proud to stand with Assemblyman Jacobson and the environmental advocates of Newburgh to call on the Department of Health to implement new water standards set forth by the Drinking Water Quality Council. DOH must follow the Legislature’s footsteps in executing real changes so that our constituents’ access to clean water doesn’t continue to be egregiously threatened. This session, the Legislature passed a bill to ban PFAS chemicals in firefighting foam from being used and manufactured in this state; this was an incredibly important step in protecting the health of all New Yorkers and we must now build on this momentum. I look forward to continuing to work with the Department of Environmental Conservation, the Department of Health, my colleagues in the state Legislature, and environmental advocates in ensuring our water is protected.”

Assembly Member Jonathan Jacobson said, “Too many communities in New York State, including the City of Newburgh, are dealing with drinking water contaminated by PFOS and other chemicals. Newburgh’s water supply has been contaminated from the fire-fighting foam used at Stewart Air Force base. This year, we passed significant legislation combatting PFOS, including the ban of using PFOS in fire-fighting foam. While these bills are important in protecting New Yorkers, the State needs to adopt new water standards. Since the new standards were recommended by the New York State Drinking Water Council last December, I have repeatedly urged the Department of Health to implement them and help stem this crisis. In addition, we must continue to insist that contamination at Stewart and the surrounding watershed be remediated.  I am proud to stand with Senator Skoufis and Environmental Advocates in this important mission because for me as a resident of the City of Newburgh, securing safe drinking water is not theoretical, but personal.”

Mayor Torrance Harvey of the City of Newburgh said, “I want to congratulate Assemblymember Jacobson and Senator Skoufis for their tireless advocacy for safe drinking water for Newburgh. I am proud to stand here with them and Environmental Advocates to continue to shine a light on this pressing situation.”

Maureen Cunningham, Senior Director for Clean Water at Environmental Advocates NY said, “No one in New York wants to drink contaminated water like the residents of Newburgh did before their drinking water crisis came to light over three years ago. Yet, the only way to protect communities around the state from the same fate as Newburgh is for the Cuomo Administration to establish strong drinking water standards to test for and treat emerging contaminants. What we have in New York are years of promises and still no action on regulating PFOA, PFAS and 1,4 dioxane in our drinking water. We are tired of these promises. We need clean water protections now.”

Ophra Wolf of the Newburgh Clean Water Project said, “Three years after Newburgh declared an emergency due to high PFOA and PFAS readings in our drinking water, the source of the pollution has not been remediated. We urge the Governor to allow small communities to set contamination levels for these emerging contaminants as low as possible based on available detection and treatment technologies, to safeguard the health of every New Yorker.”

John Gebhards, executive director of Quassaick Creek Watershed Alliance said, “Our Newburgh community has been exposed, unknowingly, for possibly decades to the ’emerging contaminant’ PFOS, which is now known to be a toxin very hazardous to our health. The only way to keep this tragedy from happening again and again across our state, is to require all public water sources to be tested for per- and polyfluoroalkyl substances and set a Maximum Contaminant Level of 2 ppt.”

Liz Moran, Environmental Policy Director for NYPIRG, said, “If the Governor and the Department of Health are serious about preventing future drinking water contamination crises, like what happened in Newburgh and Hoosick Falls, stringent drinking water standards for PFOA, PFOS, and 1,4-dioxane will be set immediately. Over 1.4 million New Yorkers are already exposed to unsafe levels of PFOA and PFOS, and 2.8 million for 1,4-dioxane. The longer there isn’t action, the greater the chances people will get sick.”

More than three years have passed since residents of Newburgh were told to stop drinking their water due to toxic PFOS contamination. Following clean water crises across the state, Governor Cuomo and the NYS Department of Health promised to establish MCLs for PFOA, PFOS, and 1,4-dioxane, but to date, they have not fulfilled this promise.

In absence of federal action, states around the country have taken steps to regulate these chemicals in drinking water. Michigan recently announced MCL recommendations for seven PFAS chemicals, including an MCL of 8 ppt for PFOA, which would be the most stringent in the nation if implemented.