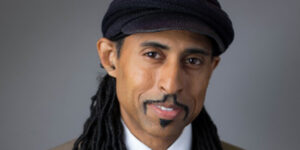 Dr. Mustafa Santiago Ali is the Vice President of Environmental Justice, Climate & Community Revitalization for the National Wildlife Federation (NWF) and the Founder and CEO of Revitalization Strategies. Before joining the NWF, Mustafa was the Senior Vice President for the Hip Hop Caucus (HHC), a national nonprofit and nonpartisan organization that connects the Hip Hop community to the civic process. Prior to joining the HHC, Mustafa worked 24 years at the EPA. He began working on Social Justice issues at 16 and joined the EPA as a student, becoming a founding member of the EPA’s Office of Environmental Justice (OEJ). He most recently served as Senior Advisor for Environmental Justice and Community Revitalization and Assistant Associate Administrator. Mustafa is frequently seen on TV, has been featured or cited in over 250 news publications and has been a guest lecturer at over 100 colleges and universities. Mustafa currently serves as a board member on the Robert Wood Johnson Foundation, Union of Concerned Scientists, National Children’s Campaign, Climate Power, TREE, One Million of Us, The Weather Channel, Green Sports Alliance & The American Academy of Arts and Sciences (AAAS).